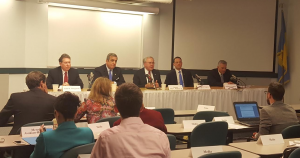 On Tuesday afternoon, the five candidates seeking to become the next Attorney General all gathered at the Philadelphia Bar Association for a forum hosted by Lauren McKenna.

On the Republican side were federal prosecutor Joe Peters and State Senator John Rafferty.

The following is a running diary of the event:

The forum began by discussing Kathleen Kane’s case and restoring public trust in the Office of the Attorney General. The candidates were asked specifically if they would have handled the emails investigation differently than Kane and if so, how would you have done so?

Morganelli started by explaining that taxpayer money has been spent on a special prosecutor to look into “bad behavior”. Special prosecutors, he stated, are for criminal investigations and there has been no suggestion of criminal behavior.

“Let’s save the taxpayers two million dollars,” he declared, before going on to assert that if he is elected Attorney General he will clean out the Attorney General office because “you can’t trust anyone anymore.”

Peters, who previously served as Kathleen Kane’s Communication Director, claimed he would release everything that he can publicly disclose while being sure to protect the innocent. He would also use the investigators we have within Pennsylvania and the federal system.

“I would not hire a prosecutor from another state and give them a grand jury. We have plenty of competent lawyers, we have a federal system.”

Rafferty stated that this was the “most disgusting period of history in our Commonwealth when these emails all came to light.” Rafferty also believed that Kane was not warranted in seeking an outside special prosecutor.

Shapiro explained that he would have disclosed everything and investigated, if ethical violations are found then it should be handled internally, not through an out-of-state Special Prosecutor. “These emails were racist and homophobic and misogynistic and anti-semitic. You have to wonder if you are getting a fair shot in our justice system today when you see emails like that swapped between judges, justices and lawyers. That’s the biggest challenge we face today.”

Zappala disagrees with Kathleen Kane’s approach as well stating “I don’t see a crime, and absent a crime I would send these emails to the appropriate agency.”

The candidates were then asked if they would continue the special prosecutor’s investigation if they were elected and they all declared that they would not and turn it over to the Ethics Board.

Morganelli used this as an opportunity to attack Commissioner Shapiro, claiming that he is not following his campaign’s platform of being ethical.

“You haven’t instituted ethics in your own county. I just took a 5 minute look at your reports and what learned, Josh, is that Exelon Corporation, PECO Energy, Gannett Fleming all are awarded million dollar contracts by you. You vote for them and then shortly before or after you receive large amounts of money in your campaign PACs.”

Morganelli went on to say that Shapiro does not have any experience as a law enforcement official and therefore wasn’t qualified to be Attorney General. The rules of the forum did not allow Shapiro to respond to the personal attack.

The forum then moved on to criminal justice reform.

Governor Wolf recently signed into law expungement legislation that limits access to the records on low-level non-violent misdemeanors. The candidates were asked if more criminal justice reform is necessary and if so what steps would you take to address that?

Commissioner Shapiro believes that the legislation was a good first step but it needs to be taken one step further so drug addiction is treated as a disease instead of a crime. He also urged more focus on juveniles, and prisoners with mental health issues.

DA Zappala pointed to legislation recently passed in Pittsburgh as an example of decriminalizing small amounts of marijuana which he hopes will keep misdemeanors down and won’t stop an individual from getting a job.

DA Morganelli wants to expand upon Governor Wolf’s legislation. Morganelli agrees with Shapiro that “ban the box” should be enacted but used the opportunity to point out that even though Shapiro supports ban the box he has not banned the box in Montgomery County.

“Once again you’re preaching but you’re not practicing what you preach” Morganelli charged.

“A single mom who is an addict in the inner city, can’t take care of her children, is a health issue, let’s leave the tough stuff for the cops and prosecutors. Let’s deal with her, reduce her drug intake, help her be a better mom, keep her out of the E.R., keep her out of the jails and have a more efficient criminal justice system.” Peters continued, “It’s not about being tough on crime, it’s about being smart on crime.”

Senator Rafferty explained that he worked on this piece of legislation signed by Governor Wolf and wants to expand it further down the road.

Since the Attorney General handles more than just crime, the candidates were asked what their vision for the civil side was. More specifically, they were pressured on the consumer protection aspect of the job.

District Attorney Zappala explained that the only deficiency in our current consumer protection laws are the anti-trust provisions. They were originally passed to protect large businesses, so the laws currently don’t have any criminal sanction for someone who engages in anti-trust conduct.

DA Morganelli would like to look at the foreign products we bring into the country like dangerous children’s toys. He also would be vigilant on prescription drugs stating that “we have a lot of problems with monopolizing the drug industry”. He believes that private law firms that specializes in these are can be brought in to assist the Attorney General.

Joe Peters stated that in this age of technology, he would focus on protecting the elderly from scams as well as addressing the problem of online identification theft.

Sen. Rafferty believes that the consumer protection side of the Attorney General’s office needs to be “upgraded”, noting that they received 37,000 complaints last year and hinted that they need more staff, explaining that “it has fallen to the wayside”.

Commissioner Shapiro says that as AG he would be sure to protect the civil rights of Pennsylvanians which he asserted nobody is doing right now. His administration would also take note of frackers drilling across the state with disregard to water safety. Shapiro also stated that the rights to a thorough education is being stripped from the children in Pennsylvania.

The constitution was the next matter discussed as the candidates were asked if they would defend a law they feel is unconstitutional.

Peters started by stating that he does not believe it is his judgement to make.

“If you determine on your own that something is unconstitutional, where does it stop? That’s why we have three branches of government.”

Commissioner Shapiro claimed that if something is not constitutional then it is the Attorney General’s responsibility to turn that over to the Office of General Counsel and that this has been the practice of previous Attorney Generals.

District Attorney Stephen Zappala thinks the Attorney General has the right not to act upon a law that they believe is unconstitutional referencing Kathleen Kane’s support of same-sex marriage in Pennsylvania.

DA John Morganelli responded that to not challenge a law you believe is unconstitutional is violating the ethical rights the Attorney General has as a lawyer and supported Kathleen Kane’s decision to support same sex marriage as well.

Lastly, the candidates were asked if they would support the continuation of the death penalty in Pennsylvania. All of the Attorney General candidates declared their support for the death penalty but also called for reforms and qualified that it can only be justifiably employed on the most heinous of criminals.