Another Liberal Group Slams Corbett in New Ad (With Video)

For the second time this week, an anonymously-funded liberal group is attacking Tom Corbett. The newly formed 501c(4) Pennsylvanians for Accountability accuses the Governor of cutting education to support corporations. 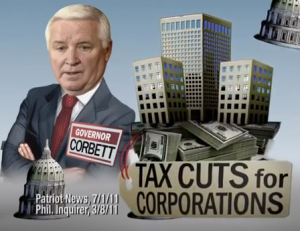 “And now, after thousands of teacher layoffs, Corbett continues to shortchange our schools. While paying for, you guessed it, another round of giveaways for his campaign donors.”

A spokesperson for the group declined to disclose its donors or the specific cost of the ad buy – neither of which is required for a 501c(4) to reveal. She said it is airing in the Pittsburgh, Harrisburg, Erie, Johnstown-area, and Wilkes Barre-Scranton markets.

It’s the first public action by the group, whose domain name was purchased back in October 2012.

It follows a small ad flight begun Monday by a group called Real American Values. The message of that advertisement – on air in Harrisburg this week – is nearly identical.

Mike Barley is the Executive Director of the Pa. Republican Party, and on April 15 will become Corbett’s 2014 Campaign Manager. He said the ad is flat-out false, and said Democrats – including newly announced gubernatorial candidate Allyson Schwartz – haven’t offered any viable alternatives.

“This ad conveniently leaves out the fact that Governor Tom Corbett has allotted more state funding to education than ever before,” Barley said. “In fact, the Governor has even proposed a plan to get our state out of the business of selling alcohol which would improve consumer convenience and deliver hundreds of millions in additional funding to Pennsylvania classrooms.”

“The only solution [Democrats] point to is increasing taxes on the backs of hardworking Pennsylvanians and more Washington, D.C. type spending. Governor Corbett will continue to fight their attempts to bring their brand of Obama-Pelosi-Schwartz politics to Harrisburg.”