Congressman Lou Barletta (R-Luzerne) is on TV in PA-11 with his first ad of the 2012 campaign season. It’s split positive and negative, with a hit against Democratic challenger Gene Stilp.

The ad, titled “In Our Corner” highlights the freshman Congressman’s first term in office, touting his fight to keep jobs in the hands of U.S. Citizens, as well as protecting medicare and social security. 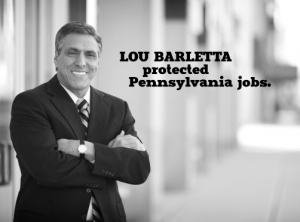 “Gene Stilp? He’s fighting for a radical agenda that dramatically cuts Medicare advantage, which over 800,000 Pennsylvania seniors count on,” the ad says, apparently referring to Obamacare.

The ad was produced by Brabender Cox and is airing in the Harrisburg and Scranton media markets to the tune of $100,000. A campaign spokesman said they hadn’t yet decided on ad details for the final week of the campaign.

In a response to the ad, Stilp didn’t pull punches. He blasted the ad, claiming that the facts and attacks are misleading.

“This ad is completely false,” said Stilp in a statement. “I support the steps taken by President Obama to protect and strengthen Medicare, which saves hundreds of billions of dollars. It is Congressman Barletta that voted for the Ryan Budget, which turns Medicare into a voucher program and harms our seniors.”

It’s the same Medicare messaging that candidates are using across the country. Obamacare and the House GOP Budget (called the Ryan plan, and which Barletta voted for twice) both remove identical sums of $716 billion from Medicare – not from beneficiaries, but from providers – in an effort to reduce waste.

“Congressman Barletta has taken hundreds of thousands of dollars from lobbyists and corporations to run this false and misleading ad. This is what’s wrong with Washington and is why I am running,” Stilp said.

Barletta is the former Mayor of Hazelton, Pa. in Luzerne County. He gained national attention during his tenure over stringent measures he proposed to crack down on illegal immigration. He has continued to focus on the issue in Congress.

Stilp, of Dauphin County, is a good government activist who most notably organized protests over the infamous 2005 legislative pay raise. He’s a quirky candidate known for outlandish props (like his pink, pig-shaped campaign bus), and he outperformed other Democrats in a 2010 run for state House.

But his challenge to Barletta is held back by poor fundraising; Stilp reported just $13,500 on hand at the end of the 3rd quarter, compared to $351,000 for Barletta.

That said, it is something that Barletta decided to throw in a jab at Stilp in the ad. Incumbents whose internal polls show them safely ahead typically don’t say their opponents’ names on television.