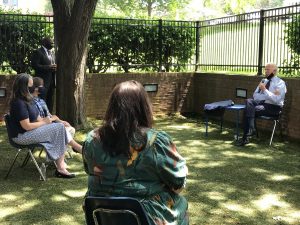 LANCASTER — Joe Biden had one unifying message on Thursday afternoon: protect the Affordable Care Act. The former VP spoke personally to a few families and delivered prepared remarks in his fourth visit to the state this month.

Biden accused President Trump, a vocal critic of the ACA whose administration supports a court-focused repeal strategy, of trying to steal the “peace of mind” of the American people, during the coronavirus pandemic.

“His failure to protect the American people from the coronavirus, and his heartless crusade to take healthcare protections away from American families,” are Trump’s “twin legacies,” Biden said.

Biden called the coronavirus pandemic the “worst public health crisis in modern history” and reiterated a point that he believes Trump is neglecting.

He wore a mask just before stepping to the microphone, which he noted was socially distanced from the audience. He also wore a mask throughout his meeting with the families, although he lowered the mask from his mouth when he held conversations with them. 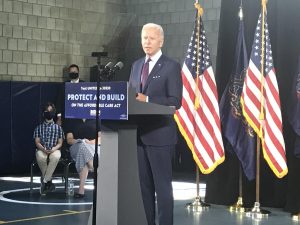 In addition to criticizing Trump’s opposition to the ACA, Biden promised that if he was elected president that his administration would pass a “beefed up element of the Affordable Care Act,” that would include a “dramatic expansion of coverage,” a public option, and lower healthcare costs.

The Trump campaign said the president’s proposals on healthcare presents a clear contrast.

“Pennsylvanians haven’t forgotten that healthcare premiums skyrocketed 120% due to Obamacare, and now Joe Biden supports a public option that many argue would pave the way for a government takeover of health care that would kick millions off their private insurance programs,” said Trump Victory Spokeswoman Melissa Reed. “Meanwhile, President Trump has lowered prescription drug costs and is expanding affordable options for all. The contrast couldn’t be clearer.”

Recent polling shows that it’s an issue that the topic favors Biden in Pa. A New York Times/Sienna College poll released Thursday morning found 52% of registered voters believe that Biden would better handle health care issues. The poll gave Biden a 50-to-40 lead head-to-head. On the coronavirus, the VP’s edge is smaller: 48-to-43. Trump’s strength, as usual, is the economy: respondents chose him over Biden 55-to-40.

Biden spoke with three separate families about their experience with the ACA during the visit to Lancaster. Stacie Ritter, a resident of Lancaster, talked about her two twins, now 22 years old, who were diagnosed with cancer at the age of four. Victoria Salerno, a resident of Chester, talked about her four year old son, Cole, who has mitochondrial disease. Amy Raslevich, a Pittsburgh native, talked about being diagnosed with breast cancer in 2017 and was joined by her daughter during the meeting.

He seemingly took a page out of Sen. Bernie Sanders’ book: “It seems to me that we should be thinking about healthcare, not as a privilege, but as a basic right,” Biden said.

Outside, dueling protesters traded chants back and forth.

There were Trump supporters who provided “four more year” chants among other sayings, while holding Trump flags and signs. There were also chants of “Black Lives Matter,” from those standing on the opposing end of the street, among other joint chants.

Also outside were reporters with LNP, Lancaster County’s primary newspaper. Reporters noted that the campaign did not include the outlet in the press pool. Biden sat down with WGAL, a Lancaster based TV outlet, in an exclusive interview after the event.

While Biden has certainly made known his fight to win back the state by visiting Pennsylvania four times alone in June when the former VP is making limited campaign trips, the Trump campaign has also placed the state as key to their reelection map.

Although the recent New York Times/Sienna College poll showed Biden with a rather comfortable lead in the Keystone State, an average of the polls shows a tighter matchup between the two in the pivotal battleground state.