Biden To Campaign in Luzerne County On Sunday 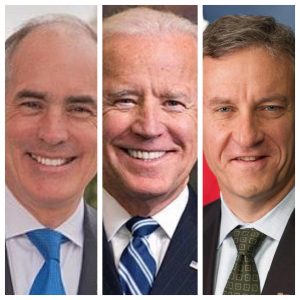 The Luzerne County rally’s definitive location is still not determined, although it is known the event will take place between 6 pm and 8 pm on Sunday night. The rally with Wolf and Scott will take place at the UA Local 520 Plumbers & Pipefitters Union Hall in Harrisburg earlier in the afternoon.

The Citizens Voice article quotes the Luzerne County Democratic Party Chairman, John Pekarovsky saying the former VP and Scranton native is still popular in the area. President Donald Trump won Luzerne County by 19 points over Sec. Hillary Clinton in the 2016 general election, after the Obama/Biden ticket won the county in 2008 and 2012.

According to CBS News White House Correspondent, Mark Knoller, President Trump does not have any planned visits for Pennsylvania in the final days of the 2018 campaign.

Today at the WH. Pres updates his workforce development program before departing for Ft Myers, FL., and the first of 11 get-out-the-vote rallies between now and Election Day. Pres determined to buck historic trend and keep Congress in his party’s hands. His 6-day rally map: pic.twitter.com/BOdT5iKV68

Trump’s last rally in Pennsylvania was held on Oct 10 in Erie.

Pence was just in the region 8 days ago, but it does not appear that he will be making any more stops in Pennsylvania before Tuesday’s election, according to Alexi McCammond of Axios.

FiveThirtyEight currently has the races for Casey and Cartwright as Solid Democratic.

Recent polls have Scott trailing the GOP incumbent by just a couple of points, while FiveThirtyEight has the race listed as Leans Republican.

This article was updated with the information that Biden will be campaigning in Harrisburg with Wolf, Scott and other Democratic officials.