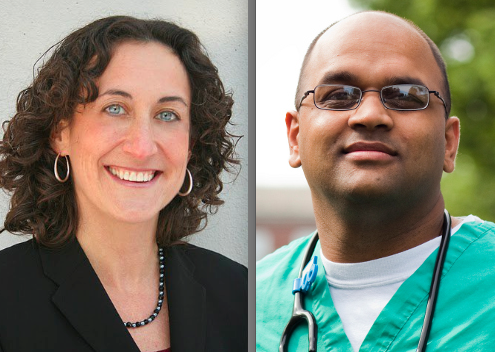 Spoiler alert: Medicare will be an issue in the 2012 congressional campaigns in southeast Pa.

Republicans stirred up a great deal of controversy in 2011 with a budget – crafted by Rep. Paul Ryan of Wisconsin – that would have made Medicare more like a voucher program.  Every indication is that the GOP won’t shy away from the issue when they build a budget this spring.

Boockvar, and attorney from Bucks County, and Trivedi, a physician from Berks County, each emailed supporters this week to bring attention to the issue.

“Remember the plan to end Medicare as we know it that Jim Gerlach and his Republican friends in Washington brought up last year?” Trivedi wrote. “Well it’s back and they’re going to vote on it because they think you forgot. They think you aren’t paying attention to it anymore. They think they have silenced you. Let’s show them they couldn’t be more wrong.”

Boockvar wrote to preempt an ad campaign by the American Action Network, a third party group that plans to spend $1.2 million on mailers and phone calls to support Republicans who supported the Ryan budget in 2011. They’re planning to boost Reps. Lou Barletta, Charlie Dent, Pat Meehand and Fitzpatrick. (See their sample mailer, for Meehan, here).

“They’re trying to mask the truth about Mike Fitzpatrick’s vote to end the Medicare guarantee for seniors and replace it with a voucher program,” she wrote. “I will always be a strong voice of support for Medicare and the Guaranteed Benefit for seniors.  Period.”

Critics said the changes proposed by Ryan would, “end Medicare as we know it,” by doing away with the guaranteed benefit structure that currently defines it. As a result, they argued that current and future retirees would pay more for medical care.

Supporters of the plan, like Fitzpatrick and Gerlach, note that Medicare as it is currently designed will go bankrupt in a decade or so. Gerlach penned an op-ed to that effect in 2011. They say that the changes wouldn’t affect current beneficiaries.

“Medicare needs a tune up before it suffers a catastrophic breakdown and leaves our grandchildren and future retirees stranded,” Gerlach wrote.

PoliticsPA was unable to reach Fitzpatrick or Gerlach for comment.