According to a Commonwealth Court filing released Friday, the court ruled that Act 77, allowing residents to vote by mail in Pennsylvania, violates Article VII, Section 1 of the Pennsylvania constitution.

The decision was three to two, with three Republican judges striking the law over the dissent of two Democratic ones.

“No-excuse mail-in voting makes the exercise of the franchise more convenient and has been used four times in the history of Pennsylvania,”  the court wrote in its opinion. “Approximately 1.38 million voters have expressed their interest in voting by mail permanently. If presented to the people, a constitutional amendment… is likely to be adopted. But a constitutional amendment must be presented to the people” before legislation like Act 77 can take effect.

Democrats had feared for months that the state’s Commonwealth Court, with its Republican majority, would strike down the 2019 law.

The court notably did not rule against the merits of mail voting and its expansion. It focused instead on how that expansion occurred, saying that change must take place through Constitutional amendment, not legislation.

“The Commonwealth Court’s decision is wrong, and I expect it to be overturned on appeal,” said Adam Bonin, an election law specialist. “Nothing in the Pennsylvania Constitution prevents the General Assembly from enabling voters to vote safely and securely from their homes.”

“Big news out of Pennsylvania, great patriotic spirit is developing at a level that nobody thought possible,” former President Donald Trump said in a statement celebrating the Pennsylvania ruling. “Make America Great Again!”

One election director told PoliticsPA, “I’ve seen this play out too many times. The Commonwealth Court will never be the final word. How dare they take a case in August and wait until January to make a decision with a primary coming up. They don’t realize the trouble they are causing elections and how much time is being wasted.”
https://www.pacourts.us/assets/opinions/Commonwealth/out/293md21_1-28-22.pdf 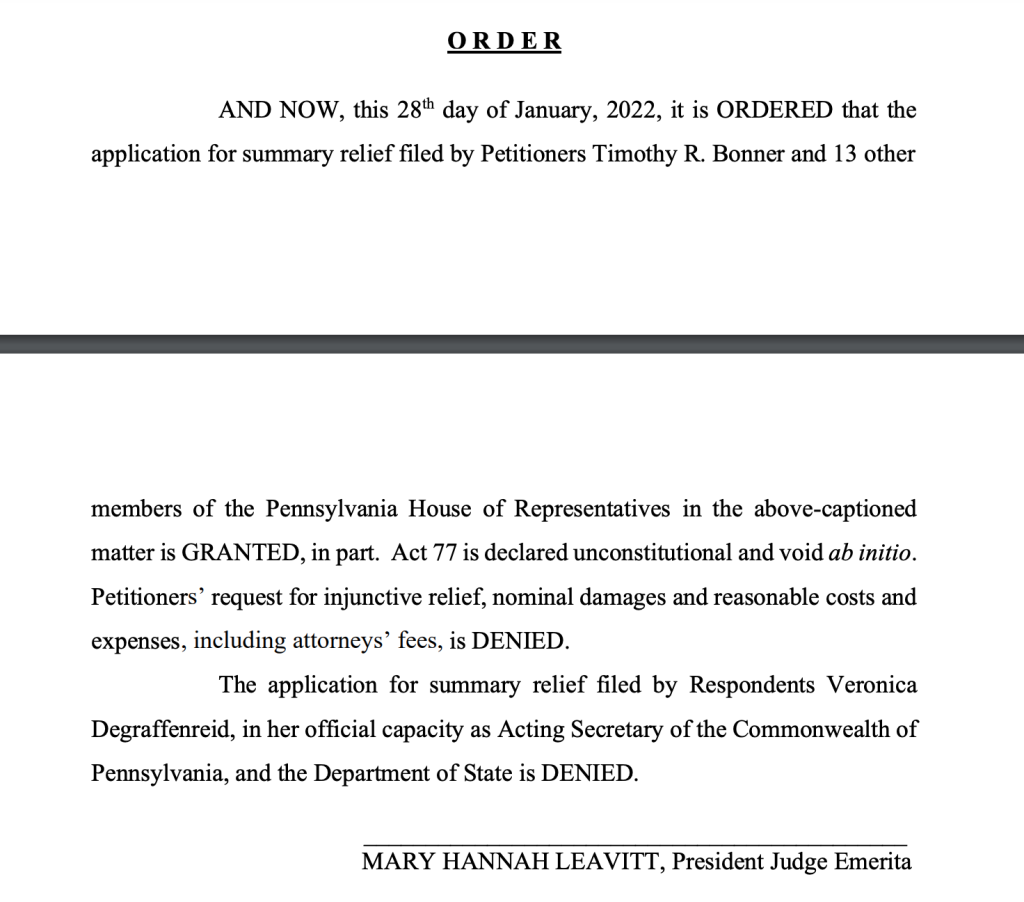