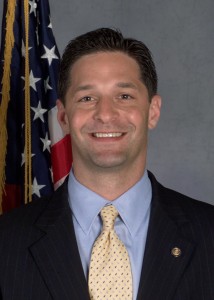 State Rep. Mike Gerber (D-Montgomery) will resign his seat at the end of this term, the lawmaker said Thursday. He has served since his election in 2004 and last cycle chaired the House Democratic Campaign Committee.

In a statement, Gerber said that he has accepted a position at Philadelphia-based alternative investment firm Franklin Square Capital Partners as its Senior Vice President of Public Affairs, Strategy, and Product Administration. He will begin on August 20, 2012 but said he will serve through this term.

“I know some friends, colleagues, supporters and party enthusiasts might be disappointed with my decision, and its timing,” said Gerber, 40. “I hope they respect the opportunity this presents for my family and appreciate the effort I have given to serving the Commonwealth and my district over the past eight years.”

He is also leaving his position with the firm Drinker, Biddle and Reath.

A vociferous Rep. and prolific fundraiser whose family roots to the Democratic party are thick, Gerber emerged as a rising star in the party soon after his election. However, Gerber’s tenure at HDCC was a difficult one; though the committee found fundraising success, the Republican tide of 2010 contributed to the greatest loss of Democratic seats in a generation.

He acknowledged that the timing of the announcement was less than ideal, but said at least voters would be spared the expense of a special election next year.

“I do not view staying on the ballot and resigning after Election Day an ethical alternative, because I do not want to ask my constituents for their votes knowing I would not complete the next term. Accordingly, I will soon withdraw my candidacy for re-election with the Pennsylvania Department of State. This timing assures there can be both a Democrat and a Republican on the ballot this fall, and the seat will have representation at all times.”

His withdrawal necessitates the selection of a new Democratic candidate for the 148th district by local party leaders.

Republican Mike Ludwig won the write-in vote in the primary after his name was removed from the ballot due to invalidated signatures revealed by petition challenges. Ludwig is also a two-time operation Iraqi freedom veteran.

Gerber won his seat in 2004, when he defeated incumbent Rep. Melissa Murphy Weber in one of the closest and most expensive PA House races of the cycle.

As of the latest report, gerber’s campaign account had roughly $60,000.