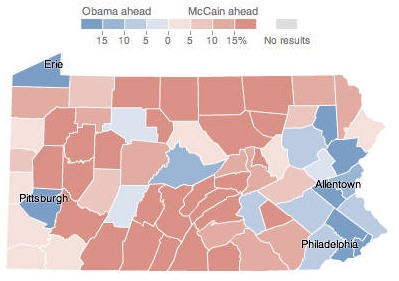 PA Senate Majority Leader Dominic Pileggi wants to allot Pennsylvania’s electoral college votes on a congressional district by district basis, rather than the current system of winner take all.

In a state like Pennsylvania, where Democratic candidates for President have won every election since 1988, it could be a way for Republicans to avoid a total loss.

Capitolwire’s Pete DeCoursey has the scoop:

Pileggi says he wants to change that “winner-take-all system,” and guide the system used in Maine and Nebraska through Pennsylvania’s Legislature this fall, before the 2012 presidential votes are cast. Republicans in both chambers say the bill has a strong chance of moving fast enough to be approved for next year.

While Democratic State Committee officials could not be reached for comment, Neil Oxman, the media consultant for the last two Democratic gubernatorial nominees and for 2010 Democratic U.S. Senate nominee Joe Sestak, said it was all about politics.

Oxman said Pileggi and his proposal were “right wing” and “reactionary. … Also a poster boy for why this state needs term limits for the idiots in Harrisburg.”

Pileggi responded: “I have no reason to comment on his opinion. … I am not sure what others are going to say. The reasons in favor of my proposal are clear. It is hard to argue against the facts that congressional districts have very different results and what we do right now does not reflect the diversity of Pennsylvania.”

In 2008, that would have meant President Barack Obama, who won the state 21-0 under the current winner-takes-all law, would have won by a mere 11-10, if Pileggi’s law was in place.