Congressmen Reveal Their Guest for State of the Union 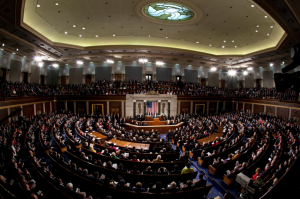 Tomorrow night, President Barack Obama will deliver his final State of the Union address to a joint session of Congress.

Since every Senator and Representative gets to bring one guest into the House chamber we decided to ask every PA member about their guest. PoliticsPA reached out to all twenty representatives, the following answered.

The Senator is taking his wife Terese.

“I am delighted that Trooper Douglass is able to join me as a guest for the State of the Union address,” said Sen. Toomey. “His bravery is an inspiration. Trooper Douglass epitomizes the courage and self-sacrifice our law enforcement officers show every day, as they put themselves in harm’s way to protect us. I look forward to Trooper Douglass’s visit to Washington, D.C. and his return to the PA State Troopers.”

“It is an honor to attend the State of the Union address,” said Trooper Alex Douglass. “It is also an honor to be invited by Sen. Pat Toomey to attend. It is a one in a lifetime opportunity. This is just another fine example of the community coming together after the tragic Blooming Grove incident. I feel privileged to represent the Pennsylvania State Police and all other law enforcement agencies in the country.”

Rep. Kelly’s guest will be Tony Digiacomo. Tony is a 17-year veteran of the U.S. Marine Corps who currently lives in Erie (originally from Saegertown). He served two tours in Iraq (2003 and 2004) and also in Somalia (1993). He currently serves in the Congressman’s office as Veteran’s Case Worker & Outreach Coordinator.

Congressman Perry’s guest for the State of the Union is Blake Lynch, Director of Development for the Boys and Girls Club of Harrisburg. Congressman Perry met Blake last year and was very impressed with his commitment to community service and helping the youth of Harrisburg grow into great and engaged citizens. Blake attended the Boys and Girls Club in his youth and his perseverance, dedication and success provides a great example for the youth he now serves. Blake currently also serves on the board of directors of the Capital Region Partnership for Career Development, and the Danny Lansanah Tackling Success Foundation. He’s an active member of Harrisburg Young Professionals, the Rotary Club of Harrisburg and the Hill Society.

Rep. Meehan’s guest in the House Gallery will be Madeline Bell, the President of the Children’s Hospital of Philadelphia.

The Congressman’s SOTU ticket was presented to the Travis Manion Foundation and Ryan Manion Borek will be attending.

Rep. Barletta will have WHP-AM talk show host R.J. Harris as his guest.

The Congressman’s guest will be Prof. Kiron Skinner of Carnegie Mellon.

Congressman Boyle will be taking the current President of the Philadelphia Black Clergy, Rev. Terrence Griffith.

Rep. Dent has invited Dan Bosket – a longtime friend. Dan works for the Community Action Committee of the Lehigh Valley.

The Congressman’s guest is his son, Jack Cartwright