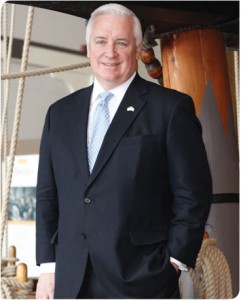 In case Tom Corbett’s 2014 plans were unclear, the Governor says he will seek a second term.

It’s not a guarantee. Corbett’s poll numbers have been upside down for most of the past year, sometimes net negative by more than 10 points.

A Public Policy Polling memo, flagged by Early Returns, lists Corbett among “Folks in a whole lot of trouble”:

Many of the Republicans who were swept into office by the wave election of 2010 may have a hard time winning a second term if 2014 doesn’t prove to be another huge year for their party.

In Pennsylvania Tom Corbett trails a generic Democrat 47/37. In Maine Paul LePage trails a hypothetical opponent from the opposite party 49/41. Both of them became unpopular pretty early in their terms and have stayed that way.

(Who do you think should challenge Corbett? Vote in PoliticsPA’s reader poll.)

Whether one of those top tier candidates decides to give it a run remains to be seen.

There are also rumors of a potential Republican primary challenge from the wing of the party that’s upset with the slow pace of conservative legislation.