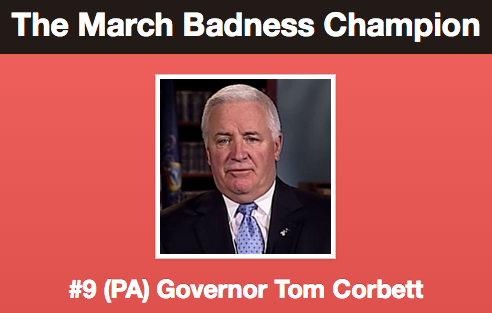 Gov. Tom Corbett overcame the likes of Congresswoman Michele Bachmann (R-MN) and others to reach the pinnacle of national liberal scorn. The secret to his win? Progressives’ flat-out mischaracterization of his ultrasound remarks.

Wrote ProgressNow, the group that ran the bracket:

Corbett defended his party’s attempt to outdo Virginia with an even more outrageous transvaginal ultrasound bill. When he was asked if he thought the bill goes too far to make a woman look at the ultrasound image, Corbett said, “You can’t make anybody watch, okay? Because you just have to close your eyes.” Corbett didn’t address how a woman can ignore the probe inside her.

Corbett sought to make a semantic point when he said no woman could be forced to watch an ultrasound, even one that would have been mandated under a proposed law in the legislature.

“I’m not making anybody watch, OK. Because you just have to close your eyes,” he said in March 2012.

However, he specifically stated before, since, and during that press conference that he opposed any ultrasound mandate that required an internal probe. “As long as it’s on the exterior and not the interior,” he said that day.

But that meaning was lost on ProgressNow voters and on those who received email from Keystone Progress, a Pa.-based group that repeatedly solicited participation in the poll.

Pete DeCoursey of Capitolwire took the group, and its leader Mike Morrill, to task:

The governor first says he only supported it “as long as it’s not obtrusive,” adding “as long as it’s on exterior, not interior,” then gets into the remarks Morrill noticed. And he said that in the very same comments Morrill is making a federal case out of. Mike Morrill is a smart guy and he knows that the words “on exterior, not interior” mean. They mean the probe would not be inside of a woman. Morrill also knows better than to play up two sentences of a quote while pretending two preceding sentences did not exist.

The result does demonstrate two important things. First, the Democratic base is especially inclined to single out Republican men who stray into awkward specifics about reproductive rights. Second, Corbett is a top target for Democrats and progressives, who have a plethora of GOP incumbents to choose from post-2010.