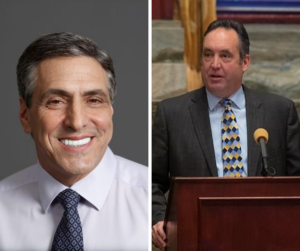 Lancaster Online is reporting that Senate President Pro Tempore Jake Corman will end his run for the Republican nomination for governor on Thursday and throw his support behind Lou Barletta.

Corman, who is still polling in single digits despite encouragement from former president Donald Trump, and other low-polling GOP candidates have been encouraged by party officials to step aside in a concerted effort to stop front-runner Doug Mastriano.

Republican officials are concerned that a Mastriano victory could hurt the entire ticket in the fall due to their concerns he is too extreme.

In the PoliticsPA moving average, Barletta is currently in second place, trailing Mastriano by three points. In the latest GOP polls released by Trafalgar and Fox News, Barletta is 10-12 points behind the Franklin County state senator.