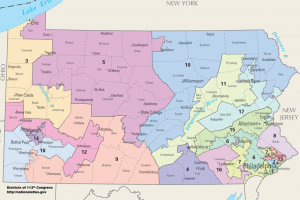 State Senator Jay Costa (D-Allegheny) is proposing a bill to change the way Pennsylvania’s Congressional districts are drawn ahead of the 2020 census.

Since Pennsylvania’s Congressional districts are drawn through the same procedure that a regular bill goes through, changing the procedure can be done without a Constitutional amendment.  This differs from what would be required for changing the reapportionment procedure.

According to The Incline, Costa is introducing a bill to create a five member panel made up of two Democrats, two Republicans, and one who is not registered to either party.  The panelists will be vetted by the secretary of the commonwealth to ensure they have never sought an elected office or was appointed to a government position among other qualifications.

Costa says that his proposal will take redistricting out of the hands of elected officials.

Pennsylvania will likely lose at least one Congressional seat after the 2020 census.  This makes the next map redrawing even more important for Democrats, who will want to gain more than the five seats they currently hold.

Costa did not tell The Incline how many cosponsors he believes the bill will get, or the chances of the bill becoming law.  The bill has a larger likelihood of becoming law if it is passed during the current session, or if Governor Tom wins re-election next year.