CREDO Super PAC released a new web video as part of a campaign called “Take Down Mike Fitzpatrick” Friday, decrying the GOP Congressman for being a “Tea Party Extremist.”

The PAC wasted no time on subtlety in the video, which begins with a screen shot of the words, “When it comes to governing Pennsylvania, Mike Fitzpatrick is clueless.”

The video basically amounts to a piecemeal composition of criticism and insults, set in a slideshow like manner to Neil Young’s “Hawks and Doves.” 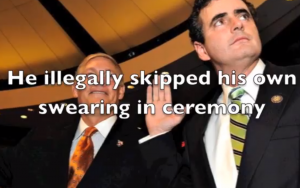 The PAC presents a list of infractions that are meant to cast Rep. Fitzpatrick (R-Bucks) as unsuitable to serve. Among them:

“He illegally skipped his own swearing in ceremony to fundraise.”

“He said Obama would ‘trade away’ America’s secrets if elected.”

“He voted to defund Planned Parenthood.”

Fitzpatrick’s Campaign Manager Faith Bender said that the ad and any Boockvar affiliation with it paints a plain picture for voters: that Boockvar is too liberal for the district.

“After Boockvar visits San Francisco to raise money with Nancy Pelosi and Michael Dukakis’ daughter, why would we be surprised that a San Francisco-based group launches a bogus ad,” Bender said.

“Boockvar is so out-of-touch with Bucks County, the only folks willing to support her are outsiders from San Francisco with names like MudCat. Adding insult to injury, do these CREDO extremists even have permission to use copyrighted music, or, did they just steal it since Neil Young ‘really didn’t build that’ song. ”

After calling Fitzpatrick an embarrassment, the ad ends with a direct call to action —“Take him down.”

PoliticsPA looked into whether the group is using the song without permission, but Warner Bros./Reprise Records representatives declined to comment.