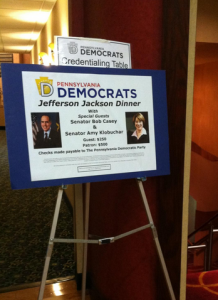 Statewide candidates in attendance were introduced earlier in the evening by Montgomery County Democratic Committee Chairman Marcel Groen, who then urged gubernatorial hopefuls not to tear each other down in the primary.

Congresswoman Allyson Schwartz was the first gov hopeful to take the stage, where she discussed her work on CHIP.

Allentown Mayor Ed Pawlowski said he wants to turn Pennsylvania around with the same success he had in Allentown.

State Treasurer Rob McCord wrapped up the marathon of gubernatorial spiels by outlining his work in standing up to Corbett as the State Treasurer.

Keynote Speaker Minnesota Senator Amy Klobuchar took the stage with a standing ovation after an introduction from Senator Bob Casey, Jr. and wasted no time laying out her vision for the future of America and Pennsylvania. “We must be a country that makes stuff again, invents things and exports to the world” Klobuchar said, praising a pro-innovation agenda.

The first female senator ever elected from Minnesota, Klobuchar riled up the party faithful when she called for tax reform.

“When you have Warren Buffett playing a lower tax rate than his secretary, we need comprehensive tax reform,” she said. She discussed a money-saving farm bill and comprehensive immigration reform that passed the Senate and ended up buried in a desk drawer in the House.

Klobuchar told the audience how she became involved in politics; as a new mother who was forced to leave the hospital 24 hours after giving birth, despite having an ill infant. Fighting for women’s rights and health care reform, she chastised Republicans for their efforts in defunding the Affordable Care Act. “They want to stop the Affordable Care Act right as Americans are getting the care that they need.”