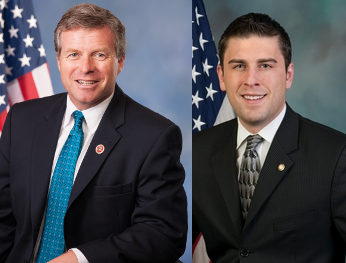 The release, titled “Dent: ‘Simmons is a Phony,’” details Dent’s issues with Simmons’ recent actions, and reveals private text messages between the two.

“Justin says one thing in private, then turns around and says the exact opposite to the potential voters he’s trying to mislead. This is a politician at his absolute worst,” Dent said in the release.

One of the text messages show Simmons asking for Dent’s endorsement during the 2016 primary election, when Simmons was facing a primary challenger.

Another one shows Simmons asking Dent “do you think there is any chance the party can replace Trump on top of the ticket?”

The hit by Dent is a clear effort to toxify Simmons to Trump supporters, who Simmons has been actively courting while considering his bid.

In a Facebook post cited in the release, Simmons says it is “time to completely drain the swamp in Washington D.C.”  evoking Trump’s campaign mantra of “draining the swamp.”

“This may be the lamest attempt of a hit piece I’ve ever seen,” Simmons wrote in an email.

“Like many Republicans, I once supported Charlie and he supported me. I asked for his endorsement before President Trump became our nominee and before Charlie went off the rails against President Trump. After Charlie decided that he would do everything in his power to make Hillary Clinton President, I no longer have supported him. Like I said the other day, he crossed a red line.”

Simmons did not deny the texts were real, but instead argued Dent was taking his comments out of context.

“My text to him about removing Donald Trump from the ticket was when the Access Hollywood Video tape hit and I was simply asking a question about what he thought the party would do since a nominee had never been in that position before. He is beyond sleazy to take a portion of a conversation out of context to make it look like something other than it was, a question,” Simmons wrote.

You can view the texts below. 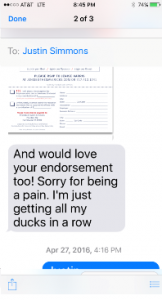 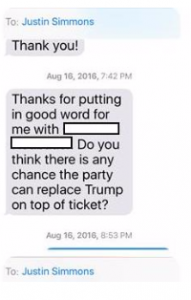