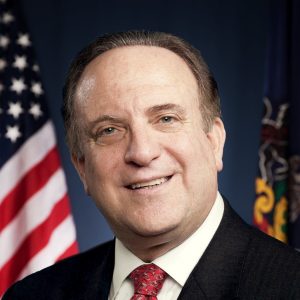 Longtime state Sen. Andy Dinniman (D-Chester) announced on Friday afternoon that he will not run for reelection in 2020. Dinniman’s decision not to seek a fourth full term will open up a Democratic-friendly seat in the Philadelphia suburbs with at least two confirmed challengers interested in representing the state’s 19th Senate District.

“For nearly 30 years, as your Chester County Commissioner and State Senator, I have had the privilege of building a close relationship with the people of Chester County. Now, I have a responsibility to explain why I will not be seeking reelection,” Dinniman said in a release. “This was a very tough decision, especially knowing just how many of you have already contributed your time and energy to my reelection campaign – from fundraising to volunteering to circulating petitions. However, as I sit at Penn Presbyterian Medical Center with my wife, Margo, who is now recovering from surgery, we both came to the sudden realization this was not the time to run again.”

Dinniman continues in the release that anyone who seeks public office understands that it’s a “family decision” and thanked his wife of 51 years for her continued support adding that she even agreed to support his plans to seek another term this year, but said it is his turn to be there for her and focus on her recovery from a procedure that will allow her to “again walk freely and live without constant pain for the first time in years.”

This announcement comes one month after he formally announced his intentions to seek another 4 year term.

The “easy” decision in the announcement was his endorsement for Don Vymazal, his longtime Director of Government Relations and Policy.

“Don, who is well-known in Phoenixville, is the most qualified, experienced, knowledgeable, and well-respected person to lead the 19th Senatorial District,” Dinniman writes in the release.

He continues to laud Vymazal as his “secret weapon” when it comes to pipeline safety and the environment, while also crediting him as a champion of women’s health, standing against discrimination against the LGBTQ community, and someone who knows how to secure key investments in the district.

“In short, Don has the vision, the passion, and the energy to continue to guide Chester County in the right direction for years to come,” Dinniman writes.

Although Dinniman coasted to a 12 point victory in his most recent reelection bid in 2016 over Republican Jack London, he was slated to face a primary challenger in Kyle J. Boyer, president of the West Chester NAACP, according to the Daily Local News.

The Chester County Democratic Party will hold its endorsement meeting on Thursday.

Boyer sent out a lengthy statement on the news of Dinniman’s retirement, crediting the sitting Senator for being an “institution” in Chester County, thanking him for his time serving as County Commissioner and state Senator, adding that he is praying for Margo as she recovers.

“For the last 30 years Andy Dinniman has been an institution in Chester County,” Boyer writes. “We, the citizens of Chester County owe him much for his years of service. Make no mistake, Andy has personally impacted the lives of countless individuals, many of whom are serving in elected office today.

“I wish Andy well as he completes his tenure and will be praying for Margo as she recovers,” Boyer writes at the end of his statement.

This story was updated to correct the statement that Dinniman is not currently the Chair of the Chester County Democratic Committee, but served in that role in the past.