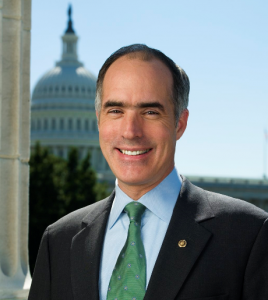 Katie McGinty will be a champion for working families. Katie will fight to grow incomes, invest in education and protect Social Security, Medicare and Medicaid. The challenge of trying to make ends meet, that working families confront daily, is personal for Katie because she’s lived it. She grew up as one of ten children to a father who was a police officer and a mother who was a hostess at a restaurant. Raised with the values of hard work and sacrifice, she became the first in her family to graduate from a four-year college and has spent her life working to make positive change. From her work in the Clinton Administration through her achievements as Secretary of the Pennsylvania Department of Environmental Protection, Katie has fought to protect the water our kids drink and the air they breathe.

When President Obama took office, our nation was losing more than 700,000 jobs a month, and during the height of the recession the unemployment rate was higher than 10%. Today, we’re experiencing the longest streak of private sector job growth in our history, some 72 months straight. The unemployment rate is also below 5% for the first time since before the Great Recession, and our economy continues to grow. There’s no question we’ve made progress since the world stared into the economic abyss. But making progress doesn’t mean our work is done. In fact, the wounds from the Great Recession have yet to heal for far too many families. We have a long way to go and this election will be a stark choice: whether we build on the progress made under President Obama to create an economy that works for all, or go back to the same policies that drove our economy into the ditch. Katie McGinty understands this challenge and is ready to fight for the policies we need that will help middle class families.

The most pressing economic challenge of our time is the need to grow incomes for families. For decades, the increasing productivity of our nation’s workers hasn’t been matched with increases in incomes. We need equal pay for equal work, an increase in the minimum wage, and more affordable health care and help for working families to pay for child care, which is increasingly one of the largest expenses families face. I know Katie McGinty will fight for these policies because the belief that every child and every family should have a fair shot at the American dream is part of who she is.

During my time in the Senate, I’ve made early care and learning for children one of my top priorities. I’ve always believed that every child is born with a light inside of them and that it’s the responsibility of every elected official to do all we can to make sure that light shines brightly. It’s more than just the right thing to do. When a child learns more earlier in life, they earn more later. Simply put, ensuring that every child has access to Pre-K is an essential part of the economic foundation of the 21st century. I know that Katie McGinty will be the kind of Senator who prioritizes early education and ensures that every child has the opportunity for a strong, smart start in their life.

If Republicans retain their majority in the next Congress, then the agendas of a President Donald Trump or Ted Cruz and the extreme right could become a reality. Republican Senate candidates across the country are campaigning on an agenda that would allow children who have a pre-existing medical conditions to be denied quality health care by insurance companies, would allow Wall Street to return to the same reckless behavior that crashed our economy and would ensure hundreds of billions in tax cuts for the wealthiest few. If we work to elect Katie McGinty, she will be part of a new majority that will do its job by ensuring future nominees to the Supreme Court are given due consideration.

The Democratic party is fortunate to have three talented candidates running to be the Party’s nominee for U.S. Senate. I’ve thought long and hard about who should be our nominee and I have no question that Katie McGinty is the candidate we need to make the changes that Pennsylvanians deserve.