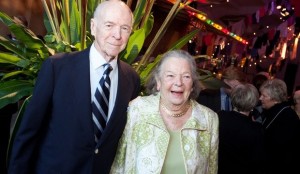 One of the most beloved and influential figures in Pennsylvania’s political history has passed away.

Elsie Hillman, a philanthropist and long-time GOP activist died today at the age of 89.

“Elsie Hillman, our dear friend, broke the mold,” President Bush said. “She was full of wisdom, full of energy, and full of humor. She was a tireless political activist, and a wonderful, caring human being. I was blessed to have her on my side. Barbara and I loved her.”

In what may very well be his first public statement of any kind since his loss in last November’s election, Gov. Corbett also commented on Elsie.

“There are so many wonderful things you could say about Elsie Hillman. Elsie was truly a very special person. She was someone who dedicated her life to helping all people, regardless of gender, race, economic standing or political affiliation,” he stated. “Elsie was known for her generosity and her unwavering commitment to her community and our commonwealth. Elsie was a mentor to me and was someone I sought counsel and advice from throughout my career.”

“I will miss her smiling face, hearty laugh and most of all her friendship,” Gov. Corbett concluded. “Susan and I send our thoughts and prayers to Elsie’s husband Henry, their family and the many who loved her.”

She is survived by her husband and four children, Lea Simonds, Audrey Fisher, Henry Hillman Jr., and Bill Hillman, as well as nine grandchildren and 14 great-grandchildren.