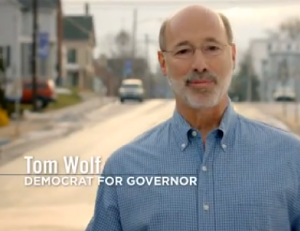 Former Auditor General Jack Wagner, the latest entry into the race, was not polled.

Just under three months away from the election, 48% of voters surveyed said they were still undecided about their pick in the Democratic primary.

Wolf had spent over $1 million on television when this poll was conducted, compared to virtually nothing by his opponents.

Among those who have not seen a Wolf television ad, Schwartz leads the hypothetical primary with 13%, followed by Wolf at 11%, McCord at 5%, 4% for some other candidate and 68% undecided.

While these are still large fields of indecision, by comparison McCord and McGinty have 81% and 86% of registered voters unsure.

Wolf’s support ideologically is much the same as the Harper Poll, 36% of self-identified liberals support him, 37% of moderates and 37% of conservatives. His closest challenger in any ideological category was Schwartz, who won 12% of liberal respondents.

In addition to registered voters who haven’t seen a Wolf ad, Schwartz leads in one other category – young voters. 20% of the under-30 category supports her, compared to just 9% for Wolf and between 1-2% for any other candidate.

Franklin and Marshall surveyed 548 registered Democrats from Feb. 18 to 23. The margin of error is plus or minus 4.2%.