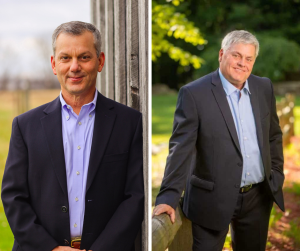 The two candidates for the Democratic nomination for the U.S. House in the 16th Congressional District met in a debate last week and, unlike the higher-profile races in the Commonwealth, talked more about the issues than the personality.

Dan Pastore and Rick Telesz are vying to meet incumbent Mike Kelly (R-Butler) in the November general election. Pastore, co-founder and chairman of FishUSA (“America’s Tackle Shop”) in Erie County, and Telesz, a farmer from Lawrence County, opted away from leveling attacks at each other during the debate.

The 16th Congressional District comprises all of Butler, Crawford, Erie, Lawrence and Mercer Counties, and parts of Venango County, including the city of Franklin, the townships of Canal, Frenchcreek, Irwin, Jackson, Mineral, Sandycreek and Victory and the boroughs of Barkeyville, Cooperstown, Polk, Sugarcreek and Utica.

Pastore has more name recognition and donor dollars entering the primary than Telesz. Pastore is commissioner for the state Fish and Game Commission’s District 1, which covers northwest Pennsylvania and includes all of the counties in the 16th District. He has spent over $195,000 in the campaign and still has over $64,000 cash on hand for the final days.

Telesz sits on the steering committee for Rural Voices USA which is a nationwide network of rural leaders, farmers and community members working to bridge the rural / urban divide and ensure rural voices are being heard on key policy issues that impact rural communities. He has spent just over $11,000 with just under $6,000 remaining.

They agreed on many discussion points, including:

Both favored continued financial support for Ukraine. Pastore said it is “showing to the world what it means to have the United States as an ally” and called the invasion an “unprovoked attack.” Telesz added “We cannot afford not to. There is too much at stake.”

Both support providing natural gas to European allies being cut off by Russia. Telesz called Russia a bigger threat to the U.S. than China, while Pastore admitted that China is a significant long-term issue.

Both favored raising the minimum wage. Pastore went a step further by suggesting the wage be tied to an inflation index so it does not become a “political football.”

On the topic of lifting the Trump-era policy allowing for quick deportation of immigrants, both agreed but differed on when.

Pastore expressed some concerns, saying “I would be of the opinion that until we have a clear plan to deal with the expected surge of migrants, that we should hold Title 42 in place.”

Pastore encouraged debt forgiveness for teachers and putting universal pre-K in place. He also wants to see the federal government provide more resources to school districts to reduce a reliance on property taxes.

One area of difference was on President Joe Biden’s “Build Back Better” package. Telesz favored bringing it back, noting many positive aspects to the plan. Pastore disagreed, stating that “history is behind us and that opportunity is passed,” he said.

Both were in agreement that those involved in the insurrection should be held accountable.

“I don’t believe in censorship, and the freedom of speech I back that 100 percent, but people have to be held accountable for doing things like this insurrection,” Telesz said. “It was wrong. To me it was an act of treason.”

Pastore, who called the attack “one of the darkest days in our history,” called out Kelly. “We also have to remember our current representative, Mike Kelly, following the last presidential election himself put out a lawsuit trying to take away the votes of his own constituents and actually change the results of the election in our state, which I find just so contrary to the interest of his own constituents it’s an attack on our fundamental rights,” he said.