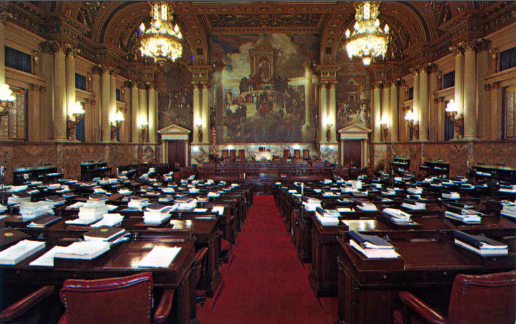 Lawmakers are great, but staffers are the people who make government happen. Here’s our fourth and final edition of the best and brightest in each of the four caucuses in Harrisburg. Today: the top 10 House Republican staff members.

Republicans made the most of their 4 years in the minority, cultivating new talent and developing their seasoned staffers. They have a relatively long-tenured group and when they took the majority in 2010, staff made the transition well. It’s a big, ideologically diverse caucus and sometimes lawmakers themselves are on different pages – but staff members seldom are.

There’s not an issue that’s brought to the floor that the policy committee doesn’t have a hand in. Brysiak knows the policy on almost everything, and is conversant on everything else. He’s a Philly guy not just in his accent, but in his frank demeanor. He was crucial to the caucus’s welfare reform effort among other accomplishments.

For most House members, Callahan is their interface with the Majority Leader. He knows the issues, needs and wants of every member of the caucus and works to balance them all – even when they’re competing. Affable and influential, the former Lock Haven football player is Turzai’s ear among House Rs.

Once a bill makes it out of the committee process, Coates is the most critical staffer in the House. She sets the calendar, works out amendments, and she’s part of any discussion on bill trading when things get down to brass tacks. Working behind the scenes at a very difficult job, she sets the direction of the House GOP each week. She’s knowledgeable, a quick riser in the caucus, and she isn’t afraid to be heard.

She’s arguably the most powerful woman in PA agriculture. The Penn State grad and former Middletown Borough Councilwoman lives and breathes ag; she knows everybody and everything to do with the issue. She writes the bills, knows every item that comes out of her committee, and is one of the strongest EDs in Harrisburg.

Hanson earned his stars – and his recent promotion to Research – after 20 years working on Labor. In that capacity, he deftly balanced a caucus that’s occasionally bipolar when it comes to labor issues – with 20 staunch conservatives looking for a fight, and 20 moderates looking for a deal. He knows how to find compromise, to move difficult legislation and to get things done.

Forget politics and intrigue. Leave the fancy titles to someone else. LaFaver will give you the nitty, gritty details on the fiscal code, gaming code, revenue projections and more. He knows the numbers inside and out – the numbers within the numbers – and handles the mechanical aspects of budgeting. He’s smart, hard-working, knowledgeable, and for more than a decade he’s been a behind-the-scenes boon to the caucus.

Miskin is the caucus’s biggest asset in the press room. He returns calls better than anyone, and his well-cultivated relationships with the reporters help the House Rs get their message across effectively. He’s got a knack for social media and he’s also a talented, honest communicator. That last part even got him fired once: when Miskin said that former House Speaker John Perzel planned to repay the state for egregious expenses (Perzel had no such intention), the Speaker showed him the door. Sam Smith hired Miskin the same day.

As you would expect from approps, Dr. Nolan knows the numbers. His depth of knowledge and his managerial style have made him a good fit on the committee. He’s also easy to talk to and well seasoned. Finally, he’s the quintessential staffer: he elevates his committee and his boss, Chair William Adolph, but he doesn’t get out in front of them.

If this was a one person list, Thomas would still be on it. He is Smith’s right-hand man: at the table for final negotiations on bills and the budget. Good at both seeing the big picture and honing in on specific issues, he’s a straight shooter with strong institutional knowledge and he always knows what’s going on. He’s also a go-to guy for members and he gets it done: when he is working a vote for the caucus, Republicans win. But he’s earned immense respect from, and works well with, both sides of the aisle.

A skilled lawyer with a solid sense of political issues, Tuckey establishes policy for the Leader’s office. Formerly with the Ridge administration and a top bill drafter for the Senate GOP, he’s been key on numerous big pieces of legislation over the years. He makes sure that members and their interests are represented in legislation, and works through such problems that arise.

A quick explanation of criteria. The smartest staffers are those whose savvy, institutional knowledge and work product make them indispensable to their caucus. Our list is based on submissions, interviews and conversations with lawmakers, lobbyists, reporters and other staffers. With apologies to talented district staff, this list contains those who do their work in Harrisburg.

Editor’s note: this project started back in November, but redistricting and the primary intervened. Thanks to all for your patience.