Rep. Will Tallman (R-Adams) faces a motivated challenger this year for the Republican nomination after having comfortably held his seat in HD-193 since 2009.

South Middleton Township Commissioner Brian Gembusia is giving Tallman quite a run and recently, as part of a media buy, Gembusia released a television ad that centers on the hot topic of property taxes.

During his time as a commissioner for South Middleton Township, Gembusia was able to completely eliminate the property tax. This led to Gembusia prodding Tallman with the comment, “One of us has talked about eliminating property taxes. One of us has done it.”

Tallman, of course, has also spoken about his desire to eliminate property taxes. In a recent article on his web site, Tallman wrote about how pensions have affected property taxes, especially of the school kind, and how he hopes to fix these problems. 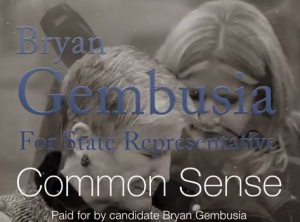 The two have met for debates several times, the most recent one happening March 12. Looking at their answers and views on various topics discussed, it’s clear that both identify themselves close enough to the far right of the spectrum: both oppose increasing the minimum wage and identify themselves as Tea Party members, according to an article about the event from The Evening Sun.

Of the same debate, an article from The Carlisle Sentinel claimed that both Gembusia and Tallman had similar views on many things, and mostly attacked each other based on which candidate was more likely to put their views into action. The biggest subject of this contest seems to be the correction or elimination of property taxes.

Interestingly, conservative activist group, Citizen’s Alliance of Pennsylvania (CAP) chose not to endorse in this race.

Despite Gembusia’s confidence that he’ll be the first to knock Tallman down in several years, results of a poll released in March could hint otherwise. The York Daily Record Politics blog reported on straw polls conducted by the York County Chapter of ACTION of PA, a very conservative-values based PAC. Following a March 15 candidate forum, Tallman beat Gembusia with roughly 70 percent of the vote; however, in the new district, York is not included and 80% of the attendees are not in the new district.