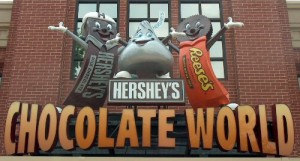 It doesn’t look like former Speaker John Boehner will be making another trip to Chocolatetown, USA anytime soon.

According to Ryan Lizza of the New Yorker, the House Freedom Caucus was born during the GOP’s annual retreat this January in Hershey. By September, Lizza reports, the HFC had forced the Speaker to resign.

“That was the first time we got together and decided we were a group, and not just a bunch of pissed-off guys,” Rep. Mick Mulvaney of South Carolina told Lizza.

Apparently, the group even came up with their name during their Hershey visit. Lizza reports that “one of the working titles for the group was the Reasonable Nutjob Caucus.”

“We had twenty names, and all of them were terrible,” Mulvaney said. “None of us liked the Freedom Caucus, either, but it was so generic and so universally awful that we had no reason to be against it.”

Lizza also talked to Pennsylvania’s Charlie Dent, who is the leader of the Tuesday Group, a coalition of 56 center-right Republicans.

Dent described the House GOP conference as currently split into three factions: “seventy to a hundred governing conservatives, who always voted for the imperfect legislation that kept the government running; seventy to eighty ‘hope yes, vote no’ Republicans, who voted against those bills but secretly hoped they would pass; and the forty to sixty members of the rejectionist wing, dominated by the Freedom Caucus, who voted against everything and considered government shutdowns a routine part of negotiating with Obama.”

“Paul Ryan’s got his work cut out for him to expand the governing wing of the Republican Party,” Dent said of the new House Speaker. “There shouldn’t be too much accommodation or appeasement of those who are part of the rejectionist wing.”

Rep. Dent also mentioned his desire to blunt the rising populist forces in his party.

“We need to help redefine what it means to be a conservative,” he said. “Stability, order, temperance, balance, incrementalism are all important conservative virtues. Disorder, instability, chaos, intemperance, and anarchy are not.”