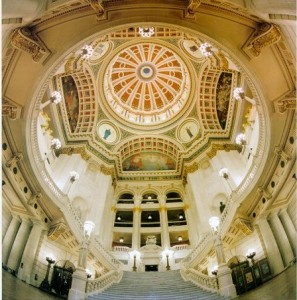 After lengthy floor debate, the Pennsylvania House of Representatives passed bills that would reduce both the size of the House and the Senate.

The bills do not come with any great cost-savings, but are instead intended to improve the deftness of the General Assembly.

“Reducing the number of members would make the General Assembly, and the House in particular, more efficient in its ability to debate and deliberate legislation by allowing members to have a better understanding of how issues are viewed differently in different areas,” Smith said. “It has become pretty evident reaching a consensus with 203 people on major and controversial issues has proven more difficult in recent times.”

Opponents of the bill spoke of the decrease in representation and access to constituents, particularly in rural districts that are more difficult to travel.

“Let us not alter the one branch of government that has the closest reach to the people,” Representative Bob Freeman (D-Northampton) argued. “Let us retain the easy ability of constituents to personally express their view and have influence directly.”

Other members, including Rep. Curtis Thomas decried the bills’ unintended consequences in diversity of representation. Thomas stated that diverse representation would be harmed by this bill and minority voices would not be adequately heard with fewer representatives.

In addition to efficiency of debate, arguments in favor of the bills discussed the ways that technology has improved access to constituents, and the large comparative size of the PA legislature compared to other states.

The two bills now move to the Senate, where a source close to the body said that the bills have nearly no chance of passage and will likely not leave committee.

Attempts to reduce the size of the General Assembly have persisted since the late 1960s, but all have failed.