Is PA a Swing State? 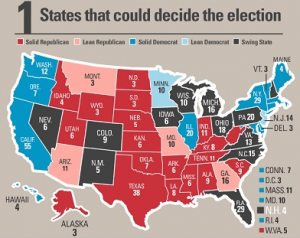 Pennsylvania has voted decidedly Democratic in the last three presidential elections, but neither candidate takes an Obama victory for granted in 2012. Stu Rothenberg asks, is PA really in play?

Rothenberg notes that in 2000, 2004, and 2008, Pennsylvania voted democratically by margins higher than the national average.

[In 2000] then-Vice President Al Gore (D) beat George W. Bush (R) in the popular vote by one-half of 1 percent — Pennsylvania went for the Democrat by more than 4 points. . . . And in 2008, Pennsylvania performed about as it had in the two previous elections. While Barack Obama (D) won nationally by just more than 7 points, he carried the Keystone State by a little more than 10 points.

Now, however, Republicans have gained a stronghold in the state Legislature, the governorship, and the House delegation, and control one Senate seat.

Pennsylvania’s largely older white and white working-class population is also very inviting to Republicans. Minorities make up only one fifth of the state population.

“Sen. John McCain (R-Ariz.) won both whites and voters 65 and older in 2008, according to the national exit poll, and the president is likely to be weaker in those two demographic groups again,” wrote Rothenberg, noting that Obama seems to hold even weaker appeal to the white working-class than he did in 2008. He added:

These voters don’t have an automatic cultural connection to Obama (or to presumptive GOP presidential nominee Mitt Romney), and the president’s recent announcement supporting same-sex marriage isn’t likely to be a plus with them. Jobs, of course, remain a big issue with these voters, and whatever hope they had that Obama would turn the economy around has almost certainly evaporated.

Rothenberg allowed that Romney clicks better than Obama with the “upscale suburbs” of Philly.

The Center for the Study of Politics and Governance at the University of Minnesota also sees potential for PA to swing, as Tim McNulty of the Pittsburgh Post-Gazette notes:

This week it called Pennsylvania one of the ‘Battleground States of the Century,’ noting that (along with Missouri and Wisconsin) lead the nation in competitive presidential contests, with results decided in the single digits in 16 of 26 cycles since 1908.

At the moment, a survey by Quinnipiac University shows Obama with the upper hand: the incumbent president has 47 percent of the vote and has 8 points over Romney. But the battle for Keystone State is far from decided.