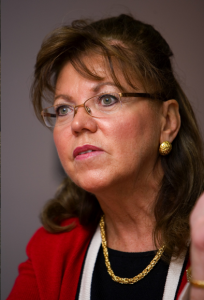 Update: Orie Melvin will be charged, according to the Pittsburgh Post-Gazette.

State Supreme Court Justice Joan Orie Melvin is expected to be charged Friday as a result of a grand jury investigation looking into improper campaign activity, according to a source familiar with the investigation.

The grand jury, which expires at the end of this month, met for more than five hours today.

Pa. Supreme Court Justice Joan Orie Melvin could be looking at an indictment by the end of the month, the Pittsburgh Tribune Review reports. She’s been under the microscope for years and would be charged with using taxpayer resources for campaigning. The accusation would follow a sprawling investigation against her sister, Senator Jane Orie, that yielded convictions earlier this year.

“Based on everything contained in the presentment relating to her sister, Janine, it’s surprising she hasn’t been indicted already,” he said.

Former Melvin law clerk Lisa Sasinoski testified in December at a preliminary hearing against Janine Orie that she did political work on state time, including working the polls on Election Day and writing speeches. A grand jury report against Orie mentioned Melvin’s name more than her sister’s and painted a picture of a judicial office immersed in partisan politics for almost two decades.

Orie Melvin, of Pittsburgh, was a PA Superior Court Judge from 1998 until her election to her current post in 2009.