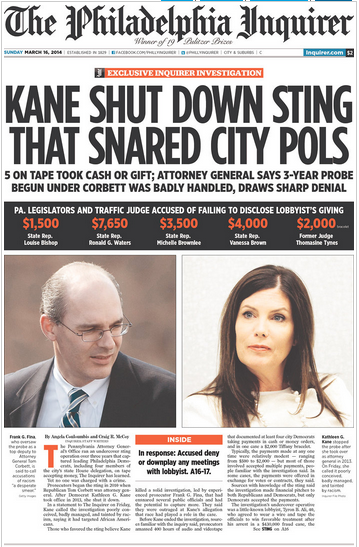 On Sunday morning, The Philadelphia Inquirer unveiled that four State Reps. were implicated in a sting operation designed to catch lawmakers accepting bribes — but none of would be charged.

That is because Attorney General Kathleen Kane called off the investigation in 2013, saying that it was “poorly conceived, badly managed, and tainted by racism,” the Inquirer reports.

The operation began in 2010 under then-Attorney General Tom Corbett, and then continued when William Ryan and Linda Kelly took over after he left to assume the role of Governor: all three Republicans.

Kane took office in 2013 and subsequently shut down the operation less than a month after her inauguration. But that was not before both audio and video evidence was collected.

Tynes admitted to accepting the bribe, but none of the State Reps. admitted or commented on the allegations.

The undercover operative was “a little-known lobbyist,” Tyron B. Ali, who had previously been arrested and convicted of fraud to the tune of $430,000. The investigation stated that Ali would dole out bribes in order to buy votes from lawmakers. Ali gave Brown $2,000 as a way to ensure that she would vote against a voter ID bill that was being passed in the House.

This lone example seems odd, however, considering that every House Rep. voted against the bill, so there is no reason to assume that Brown would not have voted that way regardless.

But Kane’s dropping of the case angered prosecutor Frank G. Fina, who said that he was taken aback by Kane’s allegations of racism driving the case. The Inquirer described the relationship between Kane and Fina as “strained.”

Kane said that the Inquirer’s assertion of their relationship is incorrect.

Kane released an extensive statement Sunday night, distancing herself and her administration from the investigation

“The allegations made by several cowardly anonymous sources in today’s Philadelphia Inquirer paint an inaccurate and sensational version of the details and timeline of events related to Case File No. 36-622. The real truth is that this investigation was not only deeply flawed, but unraveled long before I was elected and then took the oath of office.

“The majority of the work, including more than 91 percent of the recordings by a confidential informant, took place 18 months prior to my inauguration, through three former Attorneys General. Additionally, when prosecutors dismissed more than 2,000 serious charges of fraud that alleged their informant stole $430,000 meant for poor children and seniors, they crippled the chance of this case succeeding in prosecution.  Despite the case originating in 2010, this agreement to drop the charges was signed just 24 days after I was elected and weeks before I was sworn in.

“After a detailed review, we learned even more disturbing information regarding this case, including that there may have been a racial focus to the targets of the investigation, improper reporting, inadequate resources and inadmissible evidence.

“In addition, extremely alarming flaws were found in the management of the prosecution, including the failure of prosecutors to disclose the investigation to key immediate supervisors. Then-Chief of Staff Bruce Beemer was never informed of the investigation until I first learned of it on Jan. 17, 2013.”

The Inquirer did state in their article that it “pieced together the story of the aborted investigation from interviews with  more than a dozen people familiar with different aspects of the inquiry – and with widely differing opinions of it.”

It should also be mentioned that the Senior Counsel to the Attorney General stated that it was “not advisable or warranted” to prosecute the case further. The Counsel also stated that no evidence existed outside of the audio collected, and “adequate resources were not dedicated to the investigation.”

Out of the 113 tapes that Ali submitted as evidence, 108 of them were of African American targets.