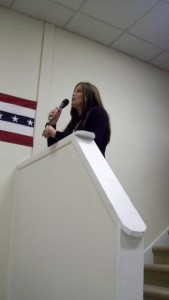 Murphy thanked his supporters in his concession speech and said, “When the going gets tough, you learn who your true friends are. All of you have worked long hours for me and I deeply appreciate it.”

He continued, “This is not the end, we are just turning the page.”

Patrick Murphy, a former professor at West Point and congressman from Bucks County whose accomplishments include shepherding the repeal of “Don’t Ask, Don’t Tell” through the U.S. House of Representatives could not garner enough support outside of his home base to declare victory.

On the other hand, Kathleen Kane earned 51% of the vote in Pittsburgh-based Allegheny County. In her home county of Lackawanna, she earned 82% of the vote.

In the end, Kane won the places she needed to to overcome the Philadelphia advantage on which Murphy had been counting.

“I’m honored and grateful to accept the Republican nomination for Pennsylvania Attorney General,” said Freed. “The general election begins right now. Our team is well-prepared for the road ahead and we’re looking forward to an honest, substantive and lively debate on how best to ensure the safety and security of our seniors, families, communities and businesses.”

Freed continued, “I applaud the winners this evening and all of the candidates who had the courage to place their names on the ballot. I also congratulate my opponent this November, Kathleen Kane. I look forward to a substantive and spirited general election campaign.”

Issues likely to come up in the campaign will be the Penn State sex scandal and corruption in the General Assembly. On Penn State, Kane has said she will educate educational institutions on reporting requirements, instruct schools to report abuse to the Police and Child Protective Services and open the CHILDLINE database to law enforcement.

Kane also has said she will not let party affiliation affect her ability to take on public officials if they engage in corruption.