The ad – just in time for football season – is narrated by a person who sounds a lot like a football announcer. He tells PA-12 voters just what kind of guy Rothfus is:

“He mows his lawn,” the narrator booms. “He takes his kids to school. He fixes things.

“He’s a regular guy and he’s running for Congress.” 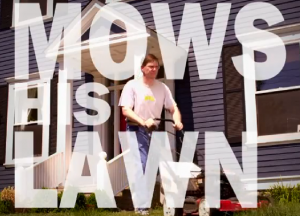 The ad shows Rothfus indeed mowing his lawn in a T-shirt and jeans, his daughter hopping out of the family Chevrolet Suburban (backpack in tow) and the candidate grilling in his backyard.

“Husband. Father of six. Rooted in our community, Rothfus shares our values and isn’t afraid to lead with them,” the ad continues.

“Rothfus fights for small businesses and against big government – and will protect Medicare by repealing Obamacare. We need one of us in Congress…Keith Rothfus.”

The Critz campaign has taken issue with that first statement that Rothfus is an everyday guy, saying that his finances (with a personal worth of up to $12 million) and support for the Ryan budget paints a very different picture.

“Keith Rothfus continues to run a deceptive campaign rather than explain why he wants to end Medicare as we know it which will cost seniors an additional $6,400 per year for health care, all to pay for more tax cuts for the wealthy,” said Critz campaign spokesman Mike Mikus.

“Keith Rothfus is worth millions of dollars and he is on the record supporting unfair trade deals that ship jobs overseas. Those positions portray a candidate who is anything but a regular guy.”

Fact-checkers have shown that the Ryan budget to which Democrats continually point is an outdated reference.

Factcheck.org listed this claim about Ryan’s budget plan as one of their “Whoppers” of 2011, saying it may get the same honor in 2012.

“CBO didn’t conduct an analysis that shows what seniors might have to spend out of pocket under the latest plan,” says FactCheck.org.

However, CBO did say there could be “reduced access to health care; diminished quality of care; increased efficiency of health care delivery; less investment in new, high-cost technologies; or some combination of those outcomes.”

This is more likely under the Ryan plan because government spending would be lower, but the $6,000 estimate or anything in that price range is not definite.