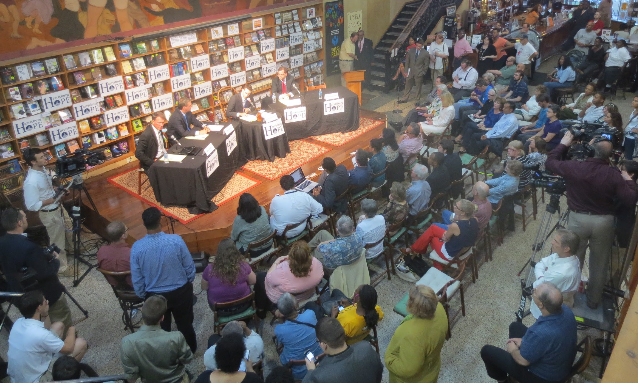 Harrisburg — The open field in the PA democratic primary left some open seats at Harrisburg Hope’s gubernatorial primary debate on Wednesday night. So did Governor Tom Corbett. Of all of the candidates, only former DEP Secretary John Hanger and minister Max Myers attended the event.

Congresswoman Allyson Schwartz was in a voting session in DC said Alan Kennedy-Shaffer, Harrisburg Hope’s founder and the debate moderator.

Even without most of the field Hanger, Myers, and Lt. Governor hopeful Brad Koplinski fielded questions from both the moderator and the sizeable, energetic audience. Koplinski is a City Councilman in Harrisburg; Bradford County Commissioner Mark Smith also has announced for LG.

When asked about the importance of debates, Hanger questioned, ”If you are not ready to do this debate why are you ready to run for governor?”

Myers cutting to the heart of the matter quipped, ”The risk is too high for those who aren’t here.”

On natural gas drilling Myers described the practice as “rape” and said that taxation on it was a no brainer. This response like many were amicable as the two Democrats have seemed to have grasped that the race to the nomination is a race to the left.

Many citizens’ questions focused on their concerns about community health issues such as pollution, mental illness and disability care. In one of the night’s clear moments of personal connection an unnamed man asked the candidates, “What will be done about job training, long term care, and housing for the mentally ill?”

“I lost a son to suicide, and I will be there for those who suffer from mental conditions,” he said.

In his first public event since winning the end of Harrisburg’s primary season Democratic nominee for Mayor Eric Papenfuse gave some brief opening remarks. The event was held in his shop, the Midtown Scholar Bookstore. Harrisburg’s State Rep. Patty Kim was also present to field a question.

“Would you support my legislation, House Bill 908, which allows for the expungement of a criminal record after seven years clean?” she saked.

All of the candidates said they would and Hanger tied it into his advocacy for what he calls and “honest” discussion on the merits of Marijuana criminalization.

While the absence of early front runners like Schwartz and McCord as well as the other candidates certainly lowered the intensity of the debate, Kennedy-Shaffer said he was already hoping for another.

“All of the candidates said that they were open to having another debate,” he said.