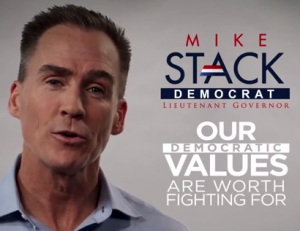 State Senator Mike Stack has consistently out fundraised his Democratic competitors for lieutenant governor, and in this final financial report, Stack used those funds to mount a very competitive media campaign.

From April 1st to May 5th, Stack’s fundraising totals petered out a bit, with the state Sen. only bring in $65,162 in campaign contributions.

However, Stack carried over an impressive $700,560 from the previous financial report, and he wasn’t afraid to spend what he had. In a little under 40 days time, Stack spent $663,212 on his campaign, a total much higher than his fellow Lt. Gov. candidates. As of May 5th he has $102,510 cash on hand.

For the most part, the donations that Stack received in the days leading up to the primary were primarily smaller donations — but those donations added up.

The bulk of Stack’s expenses came from a large media buy that he purchased through Snyder Pickerill SP Media Group to the tune of $600,000. Stacks ads began airing earlier this month.

The rest of Stack’s expenditures included consulting work, event tickets, as well as postage and mailers.