The contest between Kevin Strouse and Shaughnessy Naughton for the Democratic nomination in Pennsylvania’s 8th congressional district was perhaps the most hotly contested, and closest, election of the May primaries.

In the end, just 817 votes separated the two candidates, with Strouse emerging as the nominee. As a result, we thought it would be instructive to take an in-depth look at the geographical breakdown of the results. 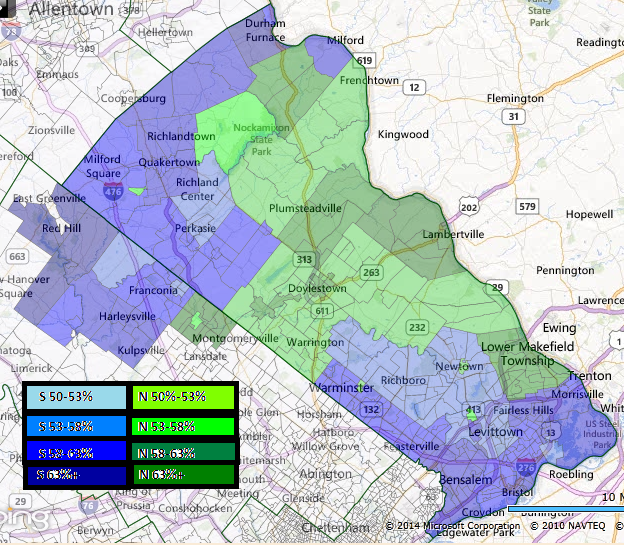 The first revelation that jumps out from that map is that, save for a few exceptions, the divisions between the areas won by Strouse (in blue) and those won by Naughton (in green) are pretty clear-cut. The former won most of lower and upper Bucks while the latter took central Bucks. Strouse also took most of the western part of the district and Naughton the east.

The Eighth District consists of all of Bucks County and parts of Northeast Montgomery county.

Strouse won all of these areas with the exception of Lower Makefield where Naughton ran strong with nearly 61%. Strouse took almost the same share of the vote in his hometown of Bensalem.

The difference came in the other townships. Strouse won handily with 60% of the vote in Falls but he carried the rest by narrow margins: 53% in Bristol Twp., 51% in Northampton, and most importantly, 52% in Middletown (home to Levittown).

Strouse’s close victories in these vote-rich areas likely made the difference.

Naughton ran admirably in Doylestown and the surround areas, including most of Eastern Bucks which includes her native Point Pleasant. She also performed well in Hatfield, the only major city in the Montco section of the Eighth.

As a comparison, check out the map we made for Fitzpatrick’s 14-point 2012 victory over Kathy Boockvar. 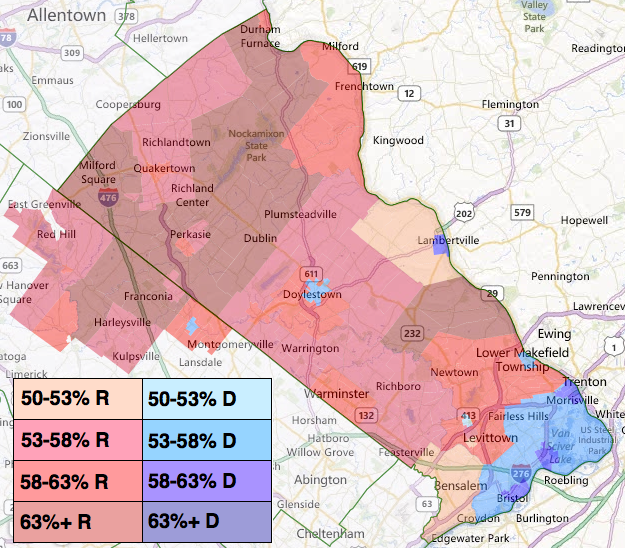 In order to win, Strouse will have to maintain his advantage in Bensalem, Warminster and the rest of lower Bucks. Rep. Mike Fitzpatrick is from Levittown which means Strouse’s total in Middletown will likely take a hit. This makes it imperative that he win over Naughton voters, especially in Lower Makefield and Doylestown.

Overall, it is very difficult to defeat an incumbent Congressman, especially in a year in which no major partisan wave (either Democratic or Republican) appears to be emerging. The primary provides a roadmap for the Strouse team but Fitzpatrick is a political veteran who has run (and won) several races in Bucks.

No matter the outcome, PA-8 could very well be the most entertaining race on election night.