Map: The Partisan Makeup of the Keystone State 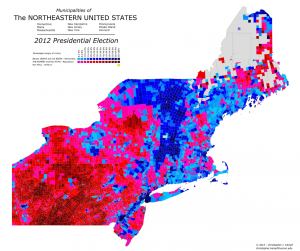 While browsing through the results of the New Hampshire primary, I came across this excellent map of the Northeast United States.

Christopher J. Kempf of the University of Connecticut broke down the 2012 presidential results by municipality for Pennsylvania (as well as New York, New Jersey, Connecticut, Rhode Island, Massachusetts, Vermont, New Hampshire and Maine).

This map is a terrific portrait of the Acela-Appalachian divide in PA, that I’ve written about recently.

Each municipality is colored a different shade of blue or red to represent the degree to which it went for either Barack Obama or Mitt Romney in the 2012 presidential election.

As you can see, central and western PA is deeply red in many places (more so than anywhere else in the Northeast) with the exception of a few metropolitan areas. Pittsburgh, Erie and Harrisburg stick out like blue sore thumbs. Other cities like New Castle and State College are also clearly visible.

The eastern half of the commonwealth, though, is quite different. There’s a blue streak from Wilkes Barre to Scranton in NEPA, while Reading and Bethlehem are also easy to spot.

The most intriguing section, though, is in the Southeast along the Acela corridor. 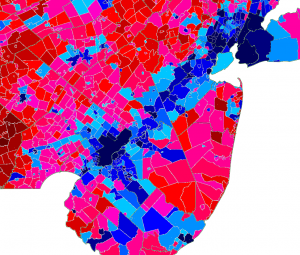 This Democratic strip runs from Washington to Boston, but it’s strongest area is between Philadelphia and New York, as the blue line cuts right through central New Jersey.

You also get a detailed view of the “collar counties” around Philadelphia that were once a Republican stronghold but have now become the key to statewide victory for the Democratic Party.

Democrats have migrated into nearly half of Montgomery and Delaware Counties. Lower Bucks keeps that county in the blue column while Chester (which first went Democratic in 2008) is slowly turning into its neighbors.

Thanks to this terrific display, we have a more detailed look at the fascinating political dynamics present throughout this large commonwealth.