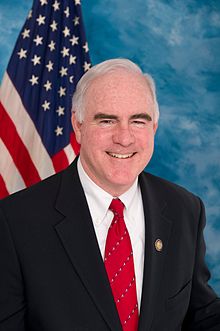 Congressman Pat Meehan paid thousands of dollars out of his office budget to settle a sexual harassment claim from a former staffer, the New York Times reported Sunday.

Speaking with 10 of the unnamed staffer’s friends and former colleagues, the Times reports that Meehan expressed romantic interest in her over a period of time, eventually growing hostile when she did not reciprocate.

But after the woman became involved in a serious relationship with someone outside the office last year, Mr. Meehan professed his romantic desires for her — first in person, and then in a handwritten letter — and he grew hostile when she did not reciprocate, the people familiar with her time in the office said.

Life in the office became untenable, so she initiated the complaint process, started working from home and ultimately left the job. She later reached a confidential agreement with Mr. Meehan’s office that included a settlement for an undisclosed amount to be paid from Mr. Meehan’s congressional office fund.

Update: Meehan denies the allegations against him.

“Congressman Meehan denies the allegations. Throughout his career he has always treated his colleagues male and female with the utmost respect and professionalism. In this case, the employee, represented by counsel, made certain assertions of inappropriate behavior which were investigated. With respect to resolving any allegation made against the office, Congressman Meehan would only act with advice of House Counsel and consistent with House Ethics Committee guidance. Every step of the process was handled ethically and appropriately. At Congressman Meehan’s request, the congressional attorneys handling the case have asked the complainant’s counsel to release all parties from the confidentiality requirements of the agreement to ensure a full and open airing of all the facts. The Congressman is hopeful that they will agree to this request for full transparency,” Meehan spokesman John Elizandro told PoliticsPA.

“Rep. Meehan believes there must be real reform to the process for resolving complaints so that those who are truly wronged are given a fair forum to be heard and vindicated, and those accused are provided with an ability to respond to baseless accusations. The public to whom elected officials are answerable must be provided with a true sense of the facts and circumstances involved.”

Meehan, a former Delaware County District Attorney, has long outperformed other Republicans in the southeast Pa. district. For example, Hillary Clinton won the 7th district by two points, while Meehan won re-election by 19 points. He currently has over $2.4 million in his campaign account. He was heavily recruited to run against Senator Bob Casey but declined late last year.

But 2018 is shaping up to be a difficult election year for Republicans and already four Democrats have declared candidacies to challenge him. The Times report will almost certainly catapult PA-7 to the top of Democrats’ list of House targets. The declared candidates are Drew McGinty, an IT professional; Elizabeth Moro, a realtor; attorney Dan Muroff; and Molly Sheehan, a biomedical researcher.

McGinty issued a statement Saturday calling on Meehan to resign.

“Patrick Meehan’s secretive settlement is just another example of Washsington’s incompetence when handling issues related to sexual misconduct. Meehan was voted in to support the best interests of the 7th district, but instead used his power to personally and financially attack a staffer. His actions are appalling and today I am calling on Meehan to immediately resign from Congress,” McGinty said.

A fifth candidate, State Sen. Daylin Leach (D-Montco), suspended his bid in light of sexual harassment allegations that were reported in December.