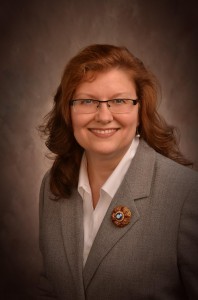 Democrat Missa Eaton has jumped into the race against freshman Rep. Mike Kelly. The assistant professor of psychology at Penn State Shenango has been considering a bid for a few weeks, and made it official Thursday morning.

“It’s time for all of us to work hard for recovery, including education for our children, protection of our seniors’ benefits, and the wise use of our natural resources,” she said in a statement. “I will be an independent voice for Western Pennsylvania, standing up to those who would end Medicare as we know it or block middle class tax breaks while fighting to protect tax cuts for Big Oil and billionaires.”

Eaton, 48, is the first challenger on the radar since Ron DiNicola, an attorney and former congressional candidate from Erie, ruled out a run. She lives in Sharon with her husband. She is the President of the Democrat Women of Mercer County.

Though conservative, the area has a history of electing moderates to the seat. Erie Congressman and later Governor Tom Ridge is pro-choice, and former Rep. Phil English was not a Tea Party-style rabble-rouser. In the same way they look at other potential swing districts, Dems see Kelly’s voting record – especially votes to change Medicare – as a liability.

However, Eaton or any Democrat is likely to face an uphill battle against Kelly – especially after redistricting. McCain carried the old third district by a narrow margin: 49 percent to 49 percent. The new district, which shed half of Erie County and absorbed all of Butler, went for McCain 52 percent to 46 percent.

Kelly’s campaign brushed off the news, and said the Congressman is paying attention to his job in DC.

“We won’t be commenting on any potential opponents for next Fall’s campaign beyond we welcome anyone to the race,” said spokesman Brad Moore. “There will be plenty of time for campaigning next Fall but for now Mike’s focus is on aggressively fighting for better jobs and economic growth policies along with reducing the size and scope of federal government to save the country’s financial future for our children and grandchildren.”

On abortion, she said:

“I don’t want a situation where the government is involved in doctors office. That should be left to a woman, her doctor, and her family,” she said. “We need to eliminate the demand for abortion,” which, “represents a failure in the system.”

On the health care bill, she says she would not vote to repeal it but is unsure how she would have approached the issue had she been in Congress.

“It promoted insurance companies, but it also did some real good,” she said. She cited the ability of people with pre-existing conditions to obtain coverage, and of young people to stay on their parents’ insurance until age 26.

“We need to look very closely at how it affects small businesses and improve any parts of it that kills jobs,” she said.

Missa Eaton, a resident of Mercer County and Assistant Professor of Psychology at Penn State Shenango, announced her bid for Pennsylvania’s 3rd Congressional District today.  Eaton has made a career out of helping others fight to overcome tough economic times and find good-paying jobs.

“I have seen first-hand the effect of the recession on people in Northwestern Pennsylvania.  My students struggle to locate good-paying jobs in their fields.  Seniors struggle with the choice between their medicines and their living expenses.  Our small businesses need economic development support to survive and thrive,” said Eaton.  “I’m running for Congress because the people of the 3rd District of Pennsylvania deserve a representative in Washington, DC who will keep their real interests at the forefront.”

Eaton continued,  “It’s time for all of us to work hard for recovery, including education for our children, protection of our seniors’ benefits, and the wise use of our natural resources.   I will be an independent voice for Western Pennsylvania, standing up to those who would end Medicare as we know it or block middle class tax breaks while fighting to protect tax cuts for Big Oil and billionaires.  It’s time to fix our broken Congress and get back to work rebuilding our economy.”

Missa Eaton has been working in education for more than 15 years, and is currently an Assistant Professor of Psychology at Penn State Shenango.

Earlier in her career, Mrs. Eaton worked in a wide range of roles including retail and real estate, giving her a well-rounded base of experience.  Mrs. Eaton grew up in a blue collar family and has spent her career helping students retrain and rebuild their skill sets so they are better equipped to find good-paying jobs in a tough economy.  Missa’s father worked in a meat packing plant until joining the army and deploying to Vietnam. After serving in Vietnam, he returned home to work as a bus driver and a leader in both his union and local VFW.  Mrs. Eaton’s mother worked as a secretary to ensure that Missa got the best education.  Her grandparents were farmers and house painters.  The examples that Missa’s parents and grandparents set taught her the same work ethic and family values that make Western Pennsylvania strong.