President Barack Obama paid a visit to a Bucks County wind turbine manufacturing plant Wednesday, marking it his first visit to any state since announcing his run for another term in The White House. 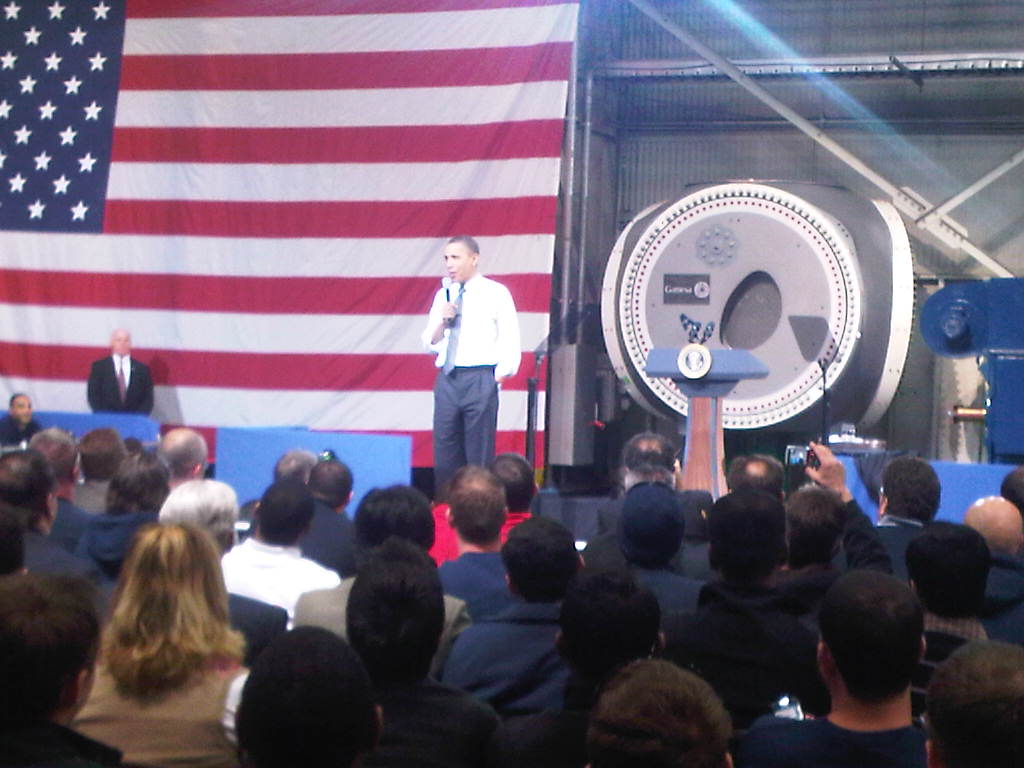 Obama toured Gamesa Technology Corp. in Fairless Hills, where he conducted a town-hall style meeting with employees and elected officials to talk clean energy. “I was here three years ago,” Obama said. “I love visiting places where people are actually making stuff.”

The factory in Fairless Hills employs about 300 people. It is a redeveloped brownfield site that Gamesa converted into a factory from an abandoned steel plant in 2005.

Gamesa, part of a Spanish company, was the first wind manufacturer to set up complete production facilities in the U.S., providing 800 Pennsylvanians jobs. Within the past three years, the company has invested more than $220 million in its Pennsylvania operations.

The President discussed his plan that aims toward renewable energy  sources like solar and wind power. “I think that what you do here is a glimpse of the future,” he told the workers.

He advocated his administration’s devotion to renewable energy sources and its capacity to stimulate the economy and job growth.  If the country tackles the issue, he vowed it will obtain 80 percent of its electricity from clean sources and scale back from its independence on foreign oil, thus squashing the fluctuating gas prices found at the pumps lately.

Obama also touched upon the Commonwealth’s hot-button topic: drilling in The Marcellus Shale. He said while natural gas burns cleaner than coal, he stressed the importance of pumping the reserve with healthy and effective methods to avoid the risk of water contamination.  “Nobody’s an environmentalist until they get sick,” he said. He underscored the need “to do some science there to make sure that the natural gas that we have in this country we’re extracting in a safe way.”

The President also took the opportunity to confront the possibility of a government shutdown if the federal budget debate goes unsettled. He chided Republicans for halting a compromise to fund the government for the remainder of the fiscal year. “…Somehow we don’t have a deal, because some folks are trying to inject politics in what should be a simple debate about how to pay our bills,” Obama said.  “They’re stuffing all kinds of issues in there, abortion, the environment, health care.  There are times to have those discussions, but the time is not now.  Right now we need to pay our bills, and the government needs to stay open.”

In addition, he urged the crowd not to be led to believe the debate is if spending cuts should be made, but rather what should be cut. He called for slashing waste and putting money into innovation and education, citing it the “single most important determinant of how we do as an economy.”

The President’s address echoed some campaign talk, vowing to continue to the fight for the American people from Washington. “Here’s what I said [in 2008.] I said I am not a perfect man and I will not be a perfect president, but I can promise you this…I will be honest with you about the challenges we face and how we can solve these problems and I will take what I hear from you,” he said.

The President plans to make a similar trip Friday in Indiana.

Politico noted that unusually, no PA members of Congress traveled with the President during his visit.