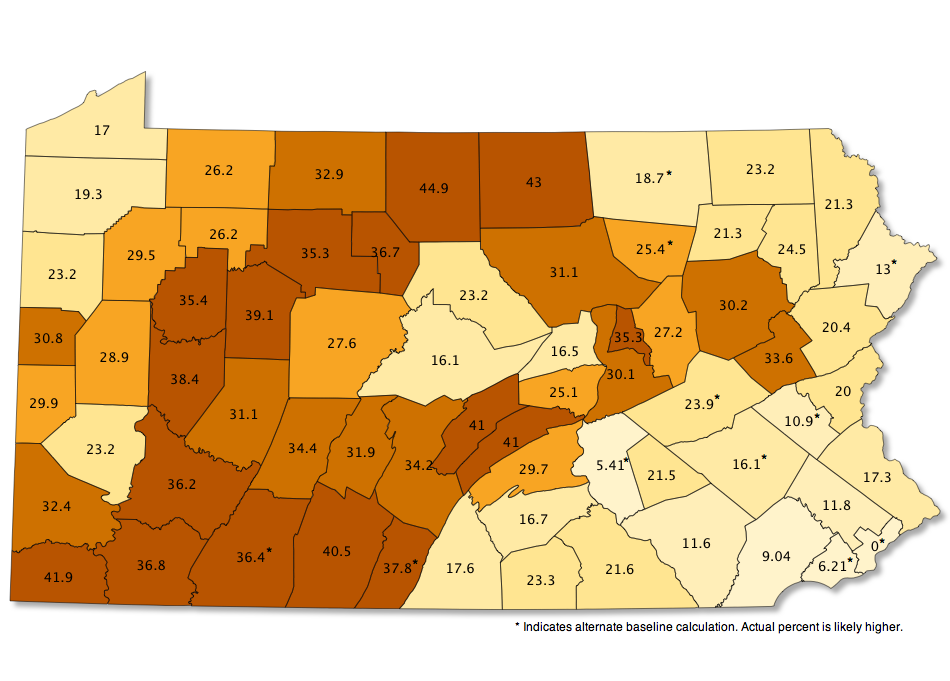 A significant portion of western and central Pennsylvania Democrats declined to vote for Barack Obama in the April primary, an analysis by PoliticsPA has found. The results there resemble those of Arkansas, Kentucky and West Virginia, where the President lost around 40 percent of the primary vote to no-name opponents or “undecided”.

A review of county-by-county vote totals show that the President underperformed historic trends, as well as other Democrats on the ballot this year.

In southwestern PA minus Pittsburgh and Allegheny County, Obama’s undervote was about 10 percent higher than that of Ed Rendell, who ran unopposed for re-election as Governor in 2006.

Undervote refers to the number of blank ballot selections as a proportion of total voters; in this case, the Democrats who voted in the primary but did not make a selection for President.

Take Greene County, for example. Tucked in the southwest corner of Pennsylvania, it’s surrounded on two sides by West Virginia and heavily reliant on the coal industry. Nearly 42 percent of nearly 4,000 Democrats in the historically blue county left the presidential ballot blank. But only 30 percent skipped McCord and DePasquale the same day. And just 26 percent skipped Rendell back in 2006.

“The first point is that most, not all, [of the undervote is] in culturally conservative counties which we would call many of the Democrats there ‘Reagan Democrats,’” he said. “Some are in rural counties. As you know, the President has problems with blue collar working class voters. He had that in 2008 and he faces the same problem now. That may not get better with his support for gay marriage and immigration reform. Also these are areas that tend to have higher unemployment which does not help.”

“But,” he added, “In all the polls the President still leads in the state, so one-on-one against Romney it might not have as much meaning, but it certainly shows a measure of discontent. That might also in part explain the huge push for a ground game, the 24 field offices the Obama campaign has opened in the state.”

Indeed, Obama’s campaign made a concerted effort during the primary to obtain petition signatures and votes for the President. Their turnout effort and Obama’s popularity in eastern PA – particularly Philadelphia and its suburbs – yielded a statewide undervote of only about 15 percent, well within historical norms. 616,000 of the approximately 770,000 Democrats who voted statewide cast their ballots for Obama.

Obama actually outperformed McCord in his home county, despite the fact that Montgomery was listed on the ballot beneath the incumbent Treasurer’s name.

And PA’s Obama campaign spokeswoman Jennifer Austin noted that there was no shortage of disenchantment on the Republican side of the primary.

“Despite investing significant time and energy in an essentially uncontested primary race, 40 percent of voting Republicans voted against Romney, and he continues to struggle to win support in Pennsylvania, as was notable during his less than smooth bus tour through the state this weekend,” Austin said.

Romney took just 58 percent of the vote in PA, despite the fact that former Senator Rick Santorum dropped out of the race two weeks before primary day and only the former Massachusetts Governor had any paid advertising. He lost 18.5 percent of the vote to Santorum, 13.1 percent to Texas Congressman Ron Paul, and 10.5 percent to former House Speaker Newt Gingrich.

She argued that economic issues would bring western PA Dems back into the fold.

“Faced with a clear choice in November between continuing to move forward with a President who has created private sector jobs for 27 straight months, and lead the manufacturing sector to its first period of growth in over a decade, or going backward with Mitt Romney who lost manufacturing jobs at twice the national average in Massachusetts while sinking the state to 3rd worst in the country for job creation, and who built his private sector career on bankrupting companies and shipping jobs overseas, voters in Western Pennsylvania and across the state will no doubt have little trouble deciding to stick with the President.”

Dr. Melanie Blumberg is a Professor of Political Science and the Director of the American Democracy Project at the California University of PA in Washington County. She said socially conservative western PA Dems may have driving up the President’s undervote, but it’s unclear whether they would vote for Romney.

“Voters in southwestern Pennsylvania are, for the most part, socially conservative and economically liberal.  It could be that the progressive agenda may have “lost” the President some supporters,” she said. “If this is the case, the question is whether voters will buy Romney-brand conservatism or if they will just stay home. Either way helps the GOP ticket.”

Republicans had another explanation for the primary results: coal and shale. PA’s Republican National Victory spokesman Billy Pitman noted that the dark areas of the map roughly correlate to communities where coal and natural gas industries are economic staples. They said the undervote was a statement about the President’s energy policies.

“President Obama’s hostility towards the energy sector has alienated the communities who rely on coal and shale development to create new jobs and support their economies,” said Pitman. “Democrats around the country and in Pennsylvania continue to join a growing coalition of Americans disappointed in President Obama’s ability to lead our economic recovery. Now, he finds his approval ratings are under water and Pennsylvania voters are turning to Mitt Romney for new ideas and leadership.”

The energy policy theory bears out in the part of the state where coal is king, but it’s too soon to tell whether Romney can count on the Marcellus shale vote. President Obama has vocally supported gas drilling, and his undervote in counties like Bradford and Washington – at the epicenter of the Marcellus boom – was actually lower than in their neighbors.

Dr. Raymond Wrabley, a professor of Political Science at the University of Pittsburgh at Johnstown, said the 2012 primary results match those of 2008. That year, Obama lost western and central PA to Hillary Clinton in the primary and significantly underperformed past Democratic presidential candidates in the general – despite cruising to a 10 point win statewide.

“Obama has struggled with working class, white Democrats, even back in 2008,” he said. “However, those voters will face a different ballot choice in November. They’ll have to choose between a Democrat who will be espousing economic views fairly close to their own and a Republican whose positions may not be as attractive.”

“So Obama will never win the white vote – and no Democrat has since 1964 – but he can still be competitive in November. There is still a lot that will happen between now and November.”

Editor’s note: PA counties have vastly different rules for distributing primary data – hence the nearly two month delay for our research. Those that require in-person requests or other onerous requirements have been marked with an asterisk. In those cases, PoliticsPA took as a baseline the number of Democrats who cast ballots in the county’s highest vote-getting contest (in every case but Philadelphia, this was the Attorney General race). The resulting numbers are likely 2-3 percent lower than the actual undervote.

Jule Pattison-Gordon contributed to this report.