On The Campaign Trail With McCord 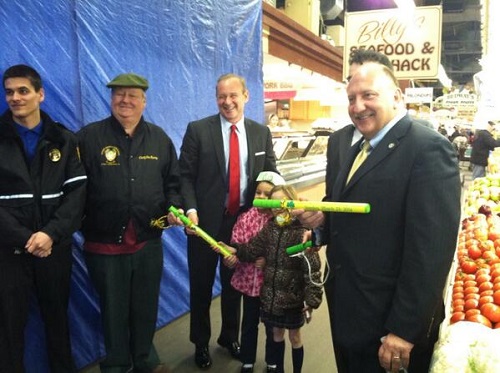 (Lehigh Valley, Pa.) — Watching Rob McCord sell retail politics is a sight to behold and he was in full-form today as he traversed the Lehigh Valley, meeting with local politicians, businessowners and plain old citizens.

The morning featured a meeting with Easton Mayor Sal Panto at a small pastry and coffee shop downtown. The State Treasurer and mayor talked about the issues facing small cities in Pennsylvania and reinvestment programs to revitalize urban cores. According to Panto, Easton is the fastest growing municipality in the Lehigh Valley among 25 to 30 year olds.

Before he left this stop, he addressed the wolf in the room: Tom Wolf, that is.

“It’s going to be an interesting set of weeks,” he said. “You know when your car is broken, and you need a new car? Well, you see a commercial and think great! But that car is not available til May 20th, and then you see other commercials and think I’ll test drive a couple of these.”

A not-so-subtle reference to Tom Wolf’s media blitz, but McCord will be up on TV starting tomorrow, joining a smaller buy from Katie McGinty, but still ahead of Allyson Schwartz and Jack Wagner in the television race.

The next stop was a private lunch with Allentown Mayor Ed Pawlowski, who had previously been in the race for governor but then dropped out to endorse McCord. They met in Bethlehem with other area stakeholders at Apollo Grille.

McCord was met by State Rep. Mike Schlossberg (D-Lehigh), who endorsed him earlier this year and showed him around the stands, collecting goodies including a box of donuts and a candied cupcake. 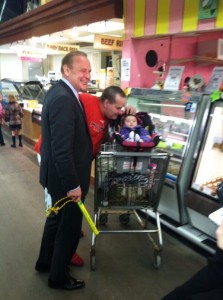 “Hi, I’m Rob, are you registered to vote?” McCord asked nearly every stand owner before inquiring about their business, how long they lived in the area, whether they liked what they were doing, and at one point literally stopped to take a photo with a man and his baby.

He was the embodiment of retail politics salesman for the entirety of the trip, stopping at delis, bakeries, candy stores and barber stands.

Toward the end of his tour, he stopped briefly to talk to reporters about his electability.

“Is this the right fit?” he asked, when cautioning that voters should examine the candidates experiences before making their selection. “Just like you wouldn’t want me to be your electrician, Corbett had uniquely poor training. He approaches the legislature with distance and suspicion; he fails to engage in a high energy way.”

One thing that McCord doesn’t lack is energy.

He bounced around for a little while longer, talking to people who had come to the farmer’s market, some who knew him but most who didn’t. He gave out cards, took down contact information and talked a lot about education, promoting his PSEA endorsement several times.

“If I vote for you and you win, I’m going to hold you to that,” one woman who worked at a Bethlehem middle school told McCord after he promised that education would be his first priority. 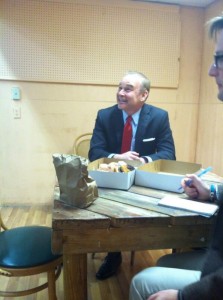 “It’s all about education,” another business owner told McCord.

To which McCord cheered, “Absolutely!” before bouncing on to the next stand.

His final stop in the Valley was a meet and greet and a local business, Billy’s Diner in downtown Allentown, part of the Neighborhood Improvement Zone that helped to create a new minor league hockey arena

McCord’s long been the favorite of labor unions and the party establishment, but he still regularly trails Wolf and Schwartz in the polls. His $200,000 ad buy that starts tomorrow may combat his low name ID with regular voters and it’s a long two months until Primary Day