On the PA-Gov Trail: Allyson Schwartz 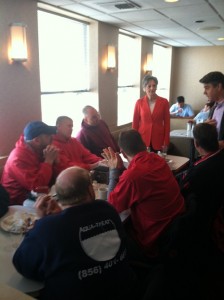 Beloved would be an understatement of the regard with which Schwartz’s constituents greeted her. At one point, she walked into the bingo hall of an adult recreation center to actual applause.

“Most politicians, they don’t care – but not Allyson,” one constituent at the adult center said. “She’s always on track and always helps people. I think so much of her; she’s a fine woman.”

Philadelphia City Councilman for the northeast region of the city, Bobby Henon escorted Schwartz through two diners, where she frequently did not require introduction. Several diners thanked her for work done from her constituent office and several more assured her of their support in the Democratic primary for governor.

Schwartz’s style in these retail-type appearances can best be described as the elegant stateswoman; she’s cool, commanding and knowledgeable but doesn’t quite dive into the small talk or friendly joking (a la Rob McCord or Katie McGinty).

Her composure was duly tested in one interaction with a man in one of the diners. The individual spewed a racially tainted diatribe about the social fabric of Philadelphia and the nature of entitlement programs. Schwartz didn’t flinch, and coaxed the man out of the rage that almost overtook him. When he began to condemn reproductive rights, Schwartz stopped him in his tracks, saying that was an issue on which they simply would not agree. By the end of the conversation, he begrudgingly promised his vote.

“I’m gonna vote for you because I like the other sleazeballs less,” he finished, but not without a shot a Councilman Henon, who he said he still opposes. 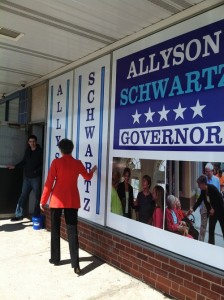 Her other interactions with voters were shorter, and far more pleasant. She told nearly every group that she talked to that she intended to go to Harrisburg and break up the “old boys club,” the theme of her latest television ad.

Moving from table to table, Councilman Henon explained that she was the only gubernatorial candidate from Philadelphia.

Schwartz, the early frontrunner in this race, has now fallen to second in nearly every poll and her strategy to reclaim the lead clearly depends on her winning big in Philadelphia. Between her terms in the State Senate and her tenure in Congress, she has represented almost two-thirds of the City of Philadelphia and her late-start to television focuses solely on buying up space in the Pittsburgh and Philadelphia markets. But those ads are reaching Philadelphians; one woman in a diner told Schwartz that she had seen and liked the ad.

She said that her team plans to expand into other markets, but that 40% of the primary electorate lives in the 5-county area in the Philadelphia media market.