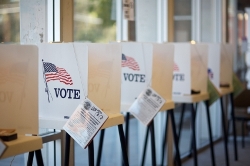 Tip O’Neill once famously said that “all politics is local,” but that mantra didn’t spur much participation in Pa. in Tuesday’s municipal primaries.

The primary yesterday determined the candidates for offices such as school boards, sheriff, and local courts that can most directly affect the lives of the PA’s citizens, turnout across the state was unimpressive.

The final number won’t be available until counties certify their results and send them to the department of state, but we’re talking turnout in the teens.

According to the PA Department of State, 511,152 Democrats voted in yesterday’s race for Pa. Superior Court. According to Labels & Lists, there were 3,467,761 Democrats registered. That’s a participation percentage on the D side of 14.7%.

Granted, it’s likely a few points higher because not every voter cast a ballot in the Superior contest (the GOP candidate was unopposed). But even if the historical average of 20% of voters left their ballots blank in the race, it means just 17% in that party voted across the state.

That also does not include the roughly 880,000 voters registered in 3rd parties or not affiliated.

While a few areas reported brisk participation, even municipalities with contested races saw few voters according to anecdotal reports.

Yesterday, the Philadelphia Inquirer reported that Philadelphia voters “yawn at primary elections.” According to City Commissioners Co-Chair Al Schmidt, “turnout was fairly low” through the state’s most populous city.

The Pittsburgh Post-Gazette noted in their election report that despite contests for the mayoral race, as well as judicial and school board contests, “turnout was light” in the region and the rest of the state.

Yet it wasn’t just the cities that experienced a paucity of voters. The Harrisburg Patriot-News stated that despite great weather voters didn’t show up to vote in the middle of the state either. Perry County elections director Bonnie Delancey asserted that “Nobody is showing up.”