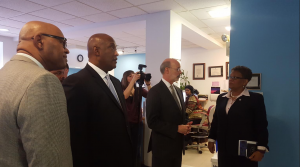 “Dwight Evans is clearly the best choice for Congress,” Gov. Wolf said. “He’ll be the block-by-block Congressman that the 2nd District needs, working to revitalize neighborhoods and he’ll be a champion for the Philadelphia area in Congress.”

“Dwight has represented a small slice of Philadelphia in the Legislature, and he’s made a big difference in people’s lives, turning a once-blighted area into a thriving commercial corridor with stable jobs and refurbished housing,” Gov. Wolf continued. “And as a Congressman, he’ll do that for every neighborhood in the 2nd District.”

“No one has gotten more done for Philadelphia in the legislature than Dwight Evans,” Gov. Wolf asserted. “He’s brought grocery stores to underserved neighborhoods in areas outside of his district, including West and North Philadelphia, a program that serves as a model for the Obama administration. And in Congress Dwight is going to fight for a urban America, focusing on lifting all people up through good jobs, education, and secure wages.”

In a press conference yesterday held at the Enterprise Center in Philadelphia, Gov. Wolf wanted to start out by pointing at Dwight Evans’ record in Harrisburg and in the neighborhood that he represents. “He is a dedicated person who stays loyal to his friends and stays true to his vision, he is a good person.”

The second factor that Wolf wanted to point out about Evans is his ability to understand development. “What we’re trying to do here is not just give people the ability to prosper and flourish, we’re trying to make this place so that it’s about people and it’s about place.” Wolf pointed attention to Evans’ long history serving his constituency and not forgetting to serve the people and the place while stating that some politicians forget to balance the two.

The third thing that Wolf explained was that “Dwight understands how to do transaction politics” which was developed as his time as House Democratic Appropriations Chairman. Even though Evans lost that position several years ago, Governor Wolf assured his audience that those skills would be useful in Washington.

The fourth and final note that Wolf made about Evans was that he “understands this value of strategic thinking in politics. Politics is not just a matter of transaction; it’s not just the matter of getting from one day to the next and one vote to the next.” Governor Wolf continued to explain that every once in awhile you have to look at the whole overarching theme and that Dwight Evans “gets it.”

Evans began his portion of the press conference by thanking Governor Wolf for his endorsement and friendship but was quick to not forget about the unions “who are the workers in moving this thing forward, it is not possible without the workers”. He also wanted to thank the small businesses who have shown him support from various sections of the city and the state.

He concluded by stating “I want to go to Washington and I want to shine a light on the aspect of urban America which has somewhat been forgotten. President Obama did a great job in dealing with the economy and there’s no question he’s done a great job but now we need that partnership with Governor Wolf, that’s what will make a difference. We will only move things when we work together.”

When Governor Wolf was asked about Congressman Chaka Fattah’s federal indictment and whether or not that had any effect on his decision about who to endorse he said it did not have an effect and that Congressman Fattah has the right to due process just as every other American citizen.