PA-8: Candidates Face Off in Round 2 of Back-to-Back Debates 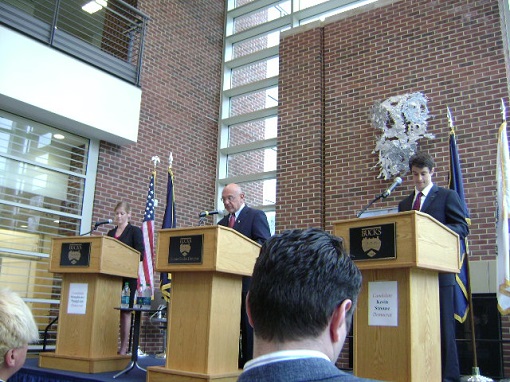 Just hours after they had last debated one another, Democratic candidates Shaughnessy Naughton and Kevin Strouse met again this afternoon at the Bristol campus of Bucks County Community College.

The debate, moderated by Professor Bill Pezza, focused on nine questions he came up with and set a tight structure for the event, in stark contrast to the forum last night. The event took placed in a tight, packed section of the building’s lobby.

Each candidate used their time to talk about their experience building relationships and Pezza followed up on the latter parts of his question.

Both candidates stated that they would welcome the President. Strouse side-stepped the Pelosi inquiry explaining he wasn’t looking past November, while Naughton praised her as an effective, female leader though stopped short of officially pledging her support.

Both candidates stated they support the act with reservations, Naughton called it a “first step” while Strouse pointed out that even former HHS Secretary Kathleen Sebelius has conceded that the website roll-out could’ve been done better. They also told personal stories of people they know who now have access to healthcare because the of ACA as explanation for why the act is necessary and why they support it.

Strouse called strengthening the middle class “the fundamental question of this campaign” and explained that improving the middle class involves education, infrastructure, and removing regulation on small businesses. Naughton also spoke of the importance of preschool and secondary education and mentioned her plan for an “Apollo-like energy program”. Each stated they favor raising the minimum wage.

Pezza used this opportunity to ask each candidate about their biggest perceived weaknesses. For Naughton, this was her lack of government experience and for Strouse this was the fact that he only recently moved into the 8th district.

“What has Mike Fitzpatrick accomplished with all his experience in Washington?” Naughton answered. “The idea that you need to have run for office to run for office sounds silly to me.”

Strouse responded that he sought his home because of the schools and housing in the area as well as to be closer to his extended family. Noting his long service in the armed forces and the CIA he explained his move was “the first time in my adult life where I’ve got to pick where I wanted to live.” Therefore, he explained. his decision is a testament to the greatness of the district.

“There’s so much” Strouse initially joked before focusing on gerrymandering. While Naughton also criticized that practice she set her sights on expanding the electorate.

In a follow-up from Pezza both candidates also indicated they would support open primaries.

This was undoubtedly the most contentious round of the debate. Both candidates spoke out against overreaches by the NSA yet Naughton was far more critical than Strouse, a former employee in the CIA Counterterrorism Center.

“We shouldn’t be assassinating American citizens overseas,” she stated. “Who is and is not guilty should not be decided by drone strikes.”

Pezza pointed out some students from Harry S. Truman High School that were attending and asked the candidates to address 9/11 since the event has become a distant memory to many young people.

Strouse’s answer was quite extraordinary as it was the first time I’ve ever seen him show emotion as he nearly teared up describing how he learned of the event at boot camp and worried about friends he had in New York City. Naughton described a trip she took to the World Trade Center shortly before 9/11 and transitioned to make a point that the issue with that tragedy was not having insufficient information, but rather being unable to find the information that was there.

Strouse, again a former CIA Counterrorism analyst, seemed to take offense at this. “I think it would be an oversimplification to say 9/11 happened because no one was doing their job,” he said.

Naughton initially backed off, but Strouse went on to say that his opponent’s response was a perfect example of how Congress blames others, particularly intelligence analysts, when things go wrong. Naughton countered that intelligence officials have themselves accepted responsibility for their failure saying “otherwise it wouldn’t have happened.” Overall, it was a tense moment between the two competitors.

Pezza took the opportunity to issue a rapid-fire series of questions pertaining to social issues to see what each candidate thought of them. Both candidates assured voters that they are pro-choice and for same-sex marriage. Naughton advocated for common-sense gun control while Strouse urged the decriminalization of marijuana as part of a broad overhaul of prison laws in the U.S.

When asked about the situation in Ukraine and how they viewed America’s role in the world Naughton and Strouse both affirmed that the U.S. maintain a leadership position. Naughton was a bit more hesitant to rush to action, stating that “patience and diplomacy have worked the best.”

Meanwhile, Strouse expressed the only real criticism of President Obama in the debate when he stated that he felt the President has “pulled back a bit in the world” and that he feels this has been a mistake.

9. What do you wish you were asked?

In an outside-the-box final question, Pezza gave the candidates a chance to answer a question that they wished they were asked.

Strouse took the opportunity to affirm that he believes in global warming and man-made climate change and worries about his children’s future if nothing is done.

Naughton answered with one of the key distinctions she has been trying to make with her opponent, that she supports a permanent ban on fracking in the Delaware River Basin.

Altogether, it was an informative, entertaining debate. Moderator Bill Pezza had a lot to do with the smooth nature and clear structure of the event and should be congratulated for that. Naughton struggled with her voice at times, likely the consequence of talking through back-to-back contests. Strouse performed well with the larger crowd and showed more humanity in his answers and demeanor than he has in the past. At the end, Pezza got their commitment to come back as the nominee to debate Rep. Fitzpatrick in the fall, illustrating that ultimately only one of them will take that podium again.