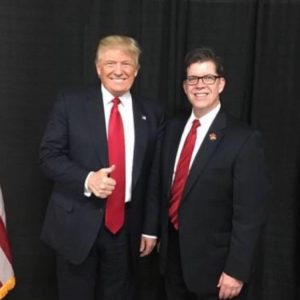 City & State reports that Mary Beth Dougherty and Dolly Malec both accused George F. Halcovage II, 61, of outbursts while he was chair of the Schuylkill County Commissioners.

He denies the allegations, saying “I have heard nothing about that until now – when I am in the middle of a campaign.  There are people who may have personal vendettas against me and who have never been for me.”

Dougherty, who worked for state Sen. Dave Argall at the time, says that Halcovage screamed at her in a courthouse elevator in February 2015 over a policy disagreement.  Malec, a former Schuylkill County Detective, says Halcovage had a similar response to how she handled a bomb threat. Both women are supporters of Republican Dan Meuser who is also running in the race.

“Dougherty says her motivation to come forward is partly political. She wants Halcovage to lose over the alleged encounter that she says was so frightening that she called the police,” City & State reports.

Dougherty eventually reported the incident to the county DA and the city police.

“A friend of mine works in the county office and I had stopped in to say hello. George spied me and says, ‘Can I talk to you?’” she remembered. “Then we get into the elevator and he gets in my face, pointing at me and saying, ‘Don’t ever send an email about this again.’”

She said Halcovage was screaming so loudly at her that his face had turned red. She said he threatened to ruin her job with Argall and blocked her attempts to leave the cramped compartment. She said that she had to yell several times before he relented.

“I could see the fury on his face,” she recalled. “I can still see the expression on his face today.”

“I saw her on the day in question when leaving the courthouse and explained to her the reasoning behind our policy in what I felt was a very professional way. Surprisingly, she went to the city police and an officer eventually spoke to me,” Halcovage told City & State.