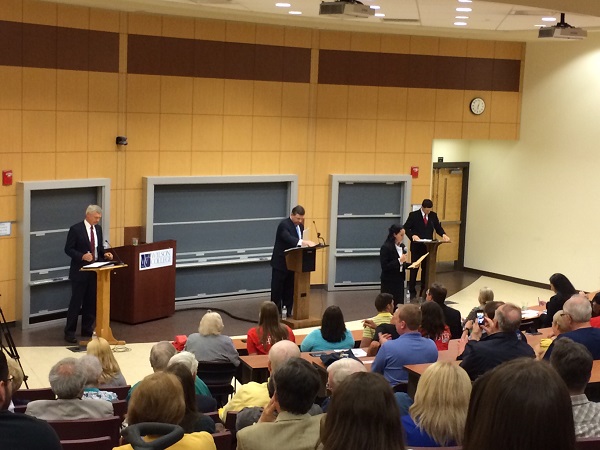 While all three raced to the right on policy issues, Halvorson struck particularly hard at the incumbent.

“Voters have a clear choice next Tuesday which is a rare opportunity in a political primary…We have a choice between the status quo and a proven leader of change,” Halvorson opened. “Heres’ what you have [in Rep. Shuster]: a John Boehner lieutenant.”

But Shuster countered with his record, pointing out his perfect rating from the NRA and his endorsement from both the NRA and the National Right to Life organization – sure signs of conservative merit.

The climax of the evening came in a heated debate over the latest farm bill. The three candidates agreed that the subsidies for farmers should be separated from legislation that funds SNAP benefits. If you’ve been watching the ads in PA-9, you’ve likely heard that Halvorson owns a farm that benefitted from farm subsidies, which he oft decries as a misguided tool that distorts the free market. The farm he owns was enrolled in the subsidies before he bought it and when they expired, he did not renew them; however, the farmers who utilize the land he owns did benefit.

“I supported [the farm bill] because it was important for farmers. I’m not the one who says subsidies are bad and then has the hand out to accept subsidies,” Shuster said pointedly at Halvorson. “I’m not criticizing farmers or subsidies for them, but hypocrisy.”

Halvorson argued that Shuster has been running misleading ads on this issue and condemned his final vote in support of the bill that funded SNAP. Schooley stayed out of this fight, and instead attacked the merits of entitlement programs.

“One of the troubling things in our country is that we have an awful lot of people who need an awful lot of help and what it comes down to is jobs and work ethic,” Schooley stated. “If we had jobs and work ethic and didn’t have these programs lying in wait, safety nets charities and faith based organizations would be doing these things. They don’t do that because government offering those things.”

Unsurprisingly in this conservative forum, the three candidates agreed in their opposition to universal background checks for gun ownership, an increase of minimum wage and amnesty for illegal immigrants.

In addition to simply supporting and opposing proposals, the moderators pushed candidates to provide alternatives to the apparent root of all evil, the Affordable Care Act.

“We can’t get between patient and doctor, we need to allow for choice, allow for insurance, allow competition which will drive down cost,” Shuster listed as requirements for an alternative. “Let small businesses pool together to give choices. Competition drives down the cost of any good. Address tort reform. Allow states more flexibility in administering programs. Not having a one sized fits all policy out of Washington, DC. Encourage personal responsibility, so when they’re healthier it drives down health care costs. [Consumers need] the ability to pick best provider.”

Another interesting moment came in the form of a question about medical marijuana. Both Shuster and Halvorson stated their opposition to medical marijuana, declaring it a gateway drug that should not be regulated by the federal government. Schooley said he was supportive of medical marijuana when properly administered by medical professionals for the treatment of sick children, but earned some laughs with his final remark to the question.

“Smoking pot makes you dumb and lazy,” he espoused.

The three passionately agreed on the importance of free market capitalism, the protection of 2nd Amendment rights and the impending danger of the growing federal debt. The audience appeared invested in the three Republican choices in front of them, and many wore red Halvorson or Shuster t-shirts that were distributed in the lobby.

This was the final debate in their series and next week, Republican voters of the 9th District will decide whether they intend to send Representative Shuster one step closer to the seat that he’s held since 2001. The winner of this primary will face Democrat Alanna Hartzok in the general election, but the district leans heavily Republican and is one of the most conservative in the state.