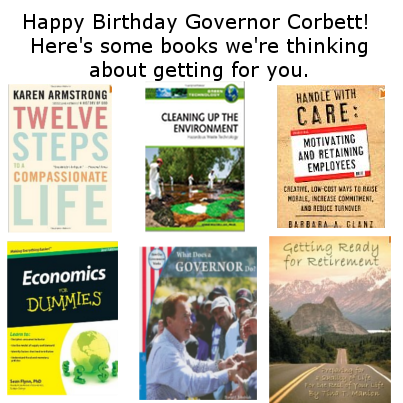 If Gov. Tom Corbett thought he would get a reprieve from political attacks just because it’s his birthday, he was way off.

“In honor of Tom Corbett 64th birthday, the Pennsylvania Democratic Party came up a list of books for the governor on his big day,” said spokesman Marc Eisenstein.

“From the economy, environment, and retaining employees, Tom Corbett has some lessons to learn.”

1. Twelve Steps to a Compassionate Life
2. Economics For Dummies
3. What Does a Governor Do?
4. Handle With CARE: Motivating and Retaining Employees
5. Getting Ready for Retirement
6. Cleaning Up the Environment

Terry Madonna is Professor of Public Affairs and Director of the Center for Politics and Public Affairs at Franklin and Marshall College. He said it was a relatively unusual – until recently – for opponents to politicize personal milestones.

“They have every right to go after the administration and his record. But there’s a way to do that without honing in on someone personally,” Madonna said.

“I’m not a fan of using holidays or birthdays in politics.”

“Governor Tom Corbett is spending his birthday the same way he spends countless other days throughout the year – working to create more private sector jobs for hardworking Pennsylvanians and reforming our government to make it more efficient.,” he said.

“Rather than attempting to take cheap political shots, I would invite the Democratic Party to join the Governor in these efforts to make Pennsylvania a better place to live, work and raise a family.”

Here’s a present from PoliticsPA. Wonder if, back when it was originally released in 1967, the 18-year-old Corbett had any idea where he’d be celebrating 64.