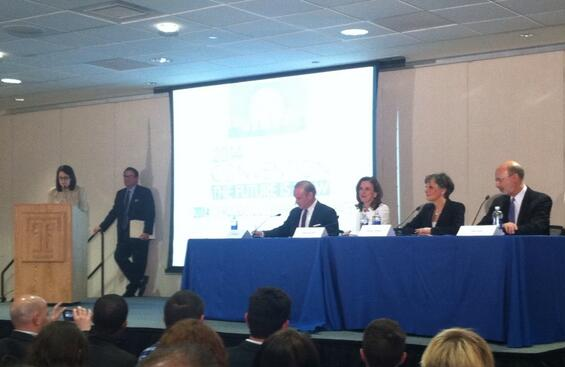 The four remaining candidates for the Democratic nomination gathered at Temple University tonight for a debate hosted by the Pennsylvania College Democrats at their annual convention.

The event was moderated by Dr. Terry Madonna, who asked questions tailored to Millennials, who made up the majority of the audience of about 150 or so. Education and health care were the biggest topics.

Despite a smaller field, the forum still ran two hours, which allowed candidates to get a bit more detailed about their proposals. McCord and Wolf tried to out-nerd each other on education funding.

“We use an average cost per pupil formula, we need to go to marginal cost funding,” Wolf stated. “Some charter schools are good; we have to keep them accountable and fund them fairly.”

“Some of these charter schools are doing a good job. We need to study what’s working and we need to share it. We need to invest and hold everyone accountable to the same level of accountability,” McCord advocated, before going on an explanation of externalities reminiscent of an Economics 101 class that may have been held in this very room.

And the conversation about charter schools was one of the lengthier in the evening. The four candidates lauded public education in Pennsylvania and declared their commitment to increasing funding for traditional brick and mortar schools. Cyber schools were less popular in this crowd.

“If it’s working for students, it works for me,” McGinty said of cyber and charter schools. “Make sure all schools operate under same rules. This is a democracy, we need transparency and accountability.”

A Governor Schwartz would be less accommodating to cyber charters.
“Cyber charter schools have to not be funded by the public. They’ve shown they have no academic value for kids,” her she stated, which earned any tweets from the College Republicans in the audience.

But Schwartz, per usual, shined on the questions of health care, given her experience in the creation of PA CHIP when she was in the General Assembly, and then serving in Congress during the passage of the Affordable Care Act. The specific question about the affordability forbade candidates from mentioning the Affordable Care Act, but they each agreed that they would support a state-run exchange.

According to polling, education is the most important issue to voters in 2014, but for many years, property tax reform has been the biggest topic and Rep. Seth Grove has introduced legislation in Pennsylvania that would drastically change the system. The four candidates for governor supported changes to the property tax funding model for public schools. They all supported greater state contribution through changes in other taxes, including corporate and extraction taxes.

Although former DEP Secretary John Hanger is no longer in the race, his influence was felt as Madonna asked candidates about their positions on marijuana.

Schwartz, McGinty and Wolf supported medical marijuana and the decriminalization of small quantities of marijuana, summarized best by McGinty, who got the question first.

“I’m impressed by what Gov Cuomo has put forward: a process that would enable the identification of those conditions that can be treated by medical marijuana,” she said. “And there’s terrible racial injustice in the incarceration, and I would decriminalize the use of marijuana and spare young lives being ruined.”

McCord, on the other hand, was not ready to jump aboard on the issue.

“First, I miss John Hanger,” he began, before stating that he supports more research and evidence into the long term effects of marijuana use and cautioning against the “fantasy island finance” based on the legalization of marijuana.

The only other issue of real distinction was the unionization of college athletes, brought on by the ruling that Northwestern football players will be allowed to unionize. McCord and Wolf supported unionization, while McGinty and Schwartz dissented.

We also learned that Wolf was a college athlete. He threw javelin at Dartmouth.

“No one believes that,” he joked.

On the whole, it was a jovial forum where, at one point, McGinty and McCord poked fun at each other’s commercials after Madonna said there were no rules to this thing.

“I was the ninth of ten children,” McCord started.

“and I had no meat to eat,” McGinty jabbed back.

Both are lines from the ads that the two are running on television now. At the end of each topic, Madonna allowed the candidates to dispute their competitors claims.

“I don’t think Rob was the 9th of 10 children,” McGinty clarified, in her characteristic, high-spirited humor.

“The lackluster Democratic candidates for governor continue to prove they have no new ideas for Pennsylvania’s future besides more of the same failed big government policies that left high unemployment and a $4.2 billion budget deficit. Our opponents, including extreme liberal Congresswoman Allyson Schwartz and Secretary Tom Wolf, who want to impose massive tax increases have made it clear they hope to export the extreme and out-of-touch Obama agenda to Harrisburg.”

“Governor Tom Corbett continues to fight for all Pennsylvanians, reducing the size of government, investing more responsibly, keeping taxes low and creating an economic climate where the private sector has created over 150,000 jobs.  In a second term, Governor Corbett will continue to deliver the ‘Less Taxes, More Jobs’ approach that is putting Pennsylvania on a path to a brighter future.”