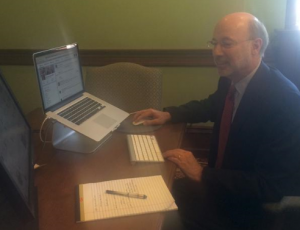 Gov. Tom Wolf tried his hand at his own form of an “Ask Me Anything” when he took to Twitter on Tuesday.

Tweeting from his official account @GovernorTomWolf, Wolf fielded questions from constituents during a half-hour long “Twitter Townhall” starting at 11 a.m. He answered a total of 18 questions on topics ranging from education to energy to working with the Republican-controlled legislature.

On the topic of education, Wolf reiterated his push for a 5 percent severance tax on natural gas extraction to fund Pennsylvania’s school system, linking to a video he posted earlier this month. He also stressed the importance of early learning and Pre-K schooling, teasing policy initiatives by telling constituents to “stay tuned for more next week.”

Wolf tackled a question about the damage of fracking by countering that the industry was vital in creating “#JobsThatPay.”

“To fulfill our potential, we must take responsible advantage of our resources,” Wolf wrote. “We can develop this industry in a safe & sustainable way. We want good jobs & a good environment.”

Wolf also insisted that he could work with the GOP-controlled legislature, highlighting his surprise visits to lawmakers earlier this month. The governor added that he and the legislature “MUST work together. We all want a better PA.”

It wasn’t just questions Wolf addressed during the townhall. Wolf answered a constituent who had tweeted about a state of emergency in Bradford, which she said only has 700,000 gallons of water for the whole town.

The Governor responded that he “spoke to the Mayor of Bradford a short while ago and closely monitoring the situation and ready to assist.”

Wolf took on all comers, even trolls.

The official Twitter account of the Pennsylvania Republican Party asked Wolf “How do you justify calling hard-working Pennsylvanians “underachiever(s)”?

Responding in three parts, Wolf wrote, “Fact check – I’ve never said that about our state’s hardworking people. They are the best. More at http://www.philly.com/philly/blogs/growls/Gov-Wolf-got-it-right.html. We’re at the bottom in the nation in job growth, have a massive deficit & struggling schools. We can do better. I will be leader for a change who brags about our great people and assets to improve PA.”

As for what he’s most proud of in his first month of office, Wolf mentioned the Medicaid expansion, gift ban and measures to protect parks and forests.

And, for those who were wondering, Wolf’s infamous jeep is a stick shift.

We also created our own Storify timeline which you can view below.