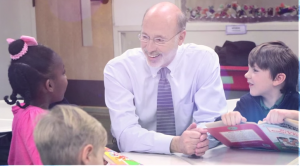 As the June 30th budget deadline quickly increases, Governor Wolf continues to urge the Republican-controlled legislature to get on board with an increase in funding for early childhood programs.

On Tuesday, Wolf and law enforcement officials stood outside the state prison and spoke about the way in which a boost in high school graduation rates would reduce the number of people in prison. In this speech, Wolf addressed the need for an increase in money for early childhood education in the proposed budget.

“If you want to make Pennsylvania a place where we have safe neighborhoods and people can grow up and have fulfilled lives – and not end up in places like this – then we need to invest in early childhood education,” said Wolf. “I can’t think of a wiser investment.”

As part of his $30 billion budget, Wolf has proposed an increase in funding for early childhood programs by $120 million. This additional money would aid another 11,600 children.

Wolf noted that this is one of several public policy ideas that should transcend political considerations.

All in all, the Governor has called for an increase in sales and income taxes in order to fund a property tax relief program and provide for the almost $1 billion bump in education funding.

In an effort to support the education funding increase, Wolf cited studies that show children who participate in high-quality preschool programs are, in turn, less likely to be arrested or incarcerated as young adults.

The national anti-crime group, Fight Crime: Invest in Kids, stated that a program like this would return a profit of $26,000 for every child served, a profit of $350 million over the lifetime of those children who would be eligible for enrollment in pre-K programs.

“I know that place across the river in Harrisburg (the Capitol) is built for conflict,” said Wolf. “But when we talk about early childhood education, and using that as a way to fight crime, we are all in this together.”